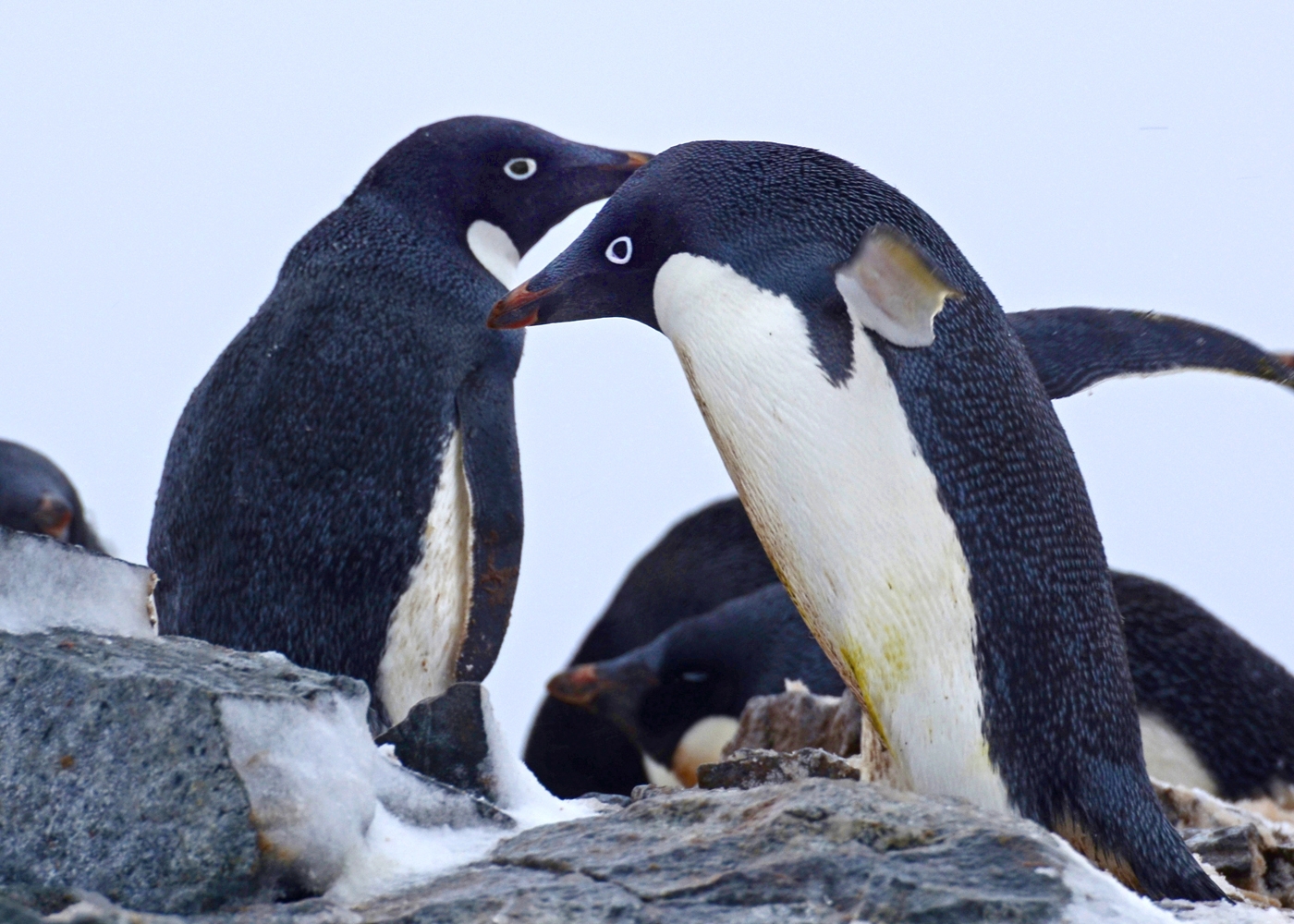 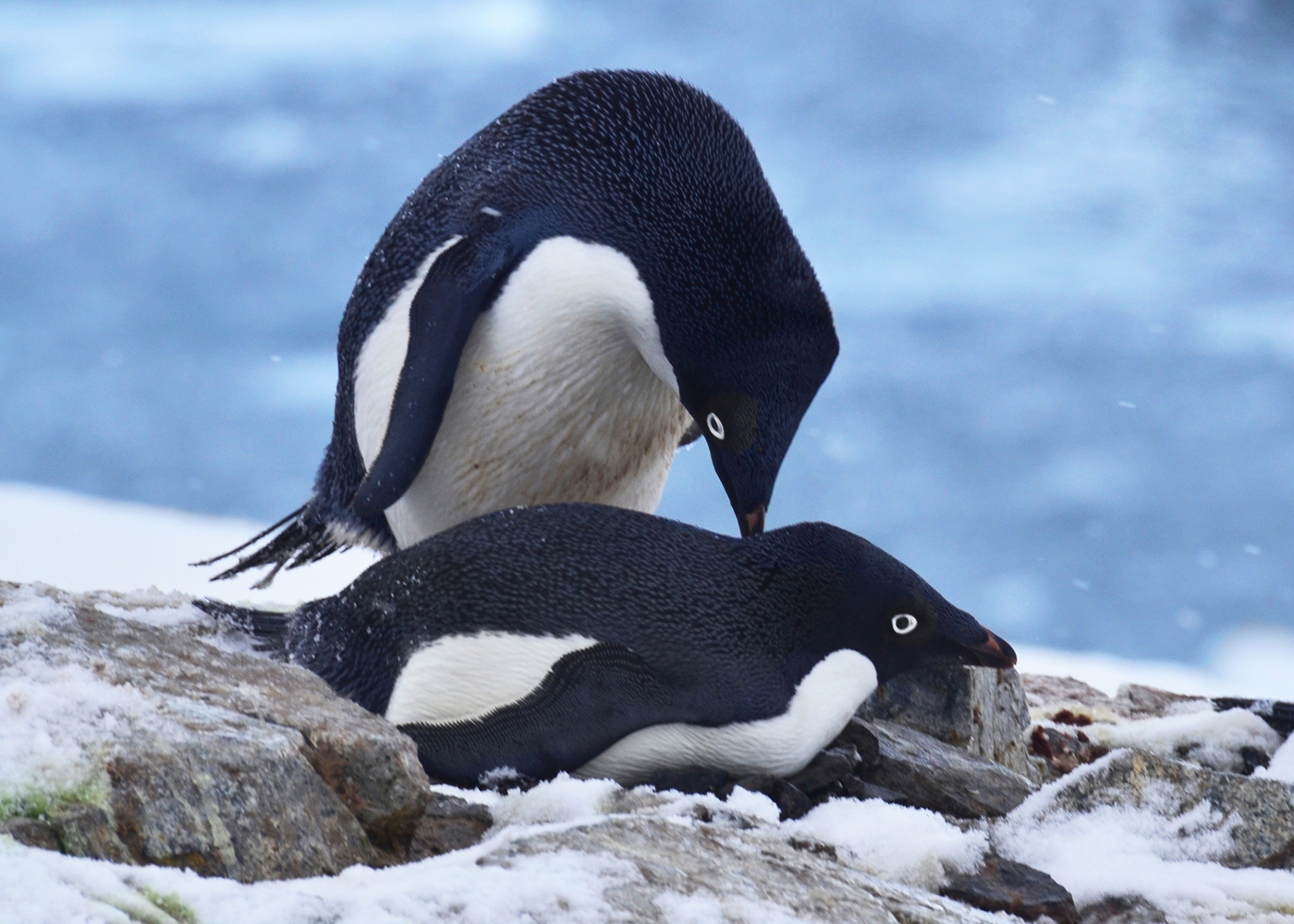 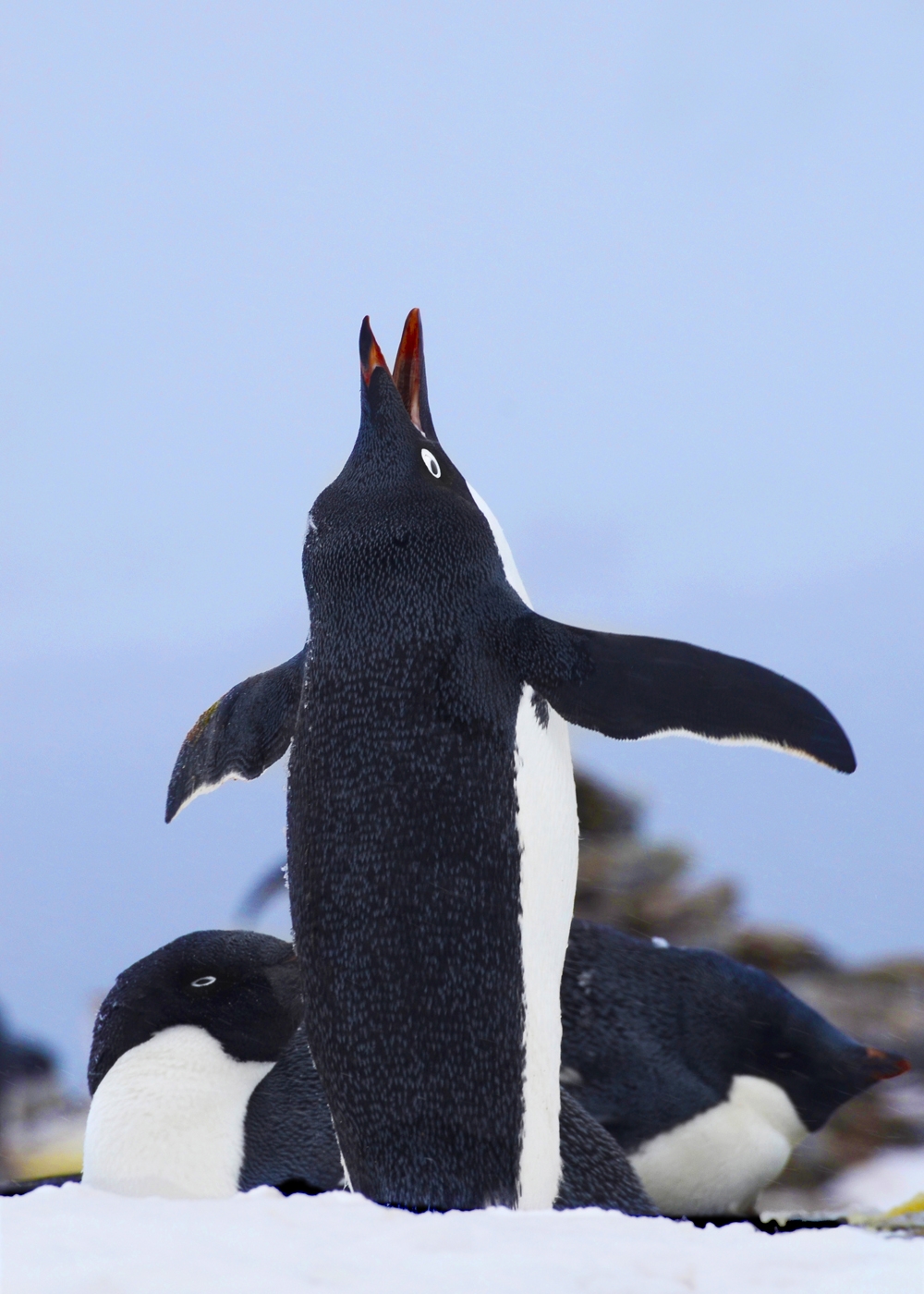 The Adélie is a mid-sized penguin with a large distinct tail. The adult has a white ring around each of its eyes. The rest of its head is black. Its back and upper body are black to a very dark brown color, while its white underbody meets the black at its neck. Its bill is black with a brick-red base. Its flippers are black on the outside with white edges. The undersides of the flippers are a pinkish-white color. The adult’s feet are pink with black soles. Its eyes have brown irises. An immature Adélie has black eye rings, in contrast to the adult’s white rings. It also has a white chin. A chick has gray and white down.

A zoo has to create a very cold environment in order to house Adélies. This makes designing an exhibit that features them quite a challenge.

Adélies arrive at their breeding colonies in September or October. Their breeding can be adversely affected by the conditions of the ice around their breeding grounds. They are less faithful than other penguins, but the majority still reunites with the previous year’s mate. Adélies begin breeding at three years of age. They breed and lay two eggs around late October. Both parents share incubation and guard duties, each fasting for more than 30 days while on duty. Chicks fledge at the early age of 50-60 days old and become totally estranged from their parents. They swim in groups of fledglings but have a difficult time learning how to feed themselves. Many fledglings die of starvation before they reach one year of age. The fledging success rate can be as healthy as 1.2 chicks per nest, but when the ice causes the parents’ trips to lengthen, it may fall to 0.5 chicks per nest and even to 0 during an extreme year.

At sea, the biggest threat to the Adélie penguin is the leopard seal. The seals catch the penguins when they are most vulnerable, entering and exiting the ocean. They are also a major predator of fledglings just learning to forage on their own. Humans also pose a threat to Adélie penguins, mainly through the overfishing of krill. Global warming, caused by human’s pollution, damages their habitat as well. Because it breeds further south, this species also can be negatively affected by the condition of the sea-ice on which it must walk before it can reach its nesting grounds. Too much ice or ice that is late to melt forces Adélie penguins to spend too much time walking. This can cause a late return to the nest and even eventual chick and nest abandonment.

Adélies stay as far south as they can, which puts them at a safe distance from most of man’s harmful activities. Many Antarctic stations are in close proximity to Adélie rookeries, so one advantage of the researchers’ presence is the large body of studies on this particular species. No doubt many of these studies annoyed and abused the poor birds, but knowledge about the Adélie is vital to any future assistance if it ever becomes necessary.

A study done near an Argentinean base on Hope Bay showed that a high volume of human visitation to the rookery has had no influence on breeding success. In fact, during one particular breeding season (1996-1997), the visited site had a much better success rate than usual (Carlini et al., 2007). Adélie penguins are not shy or afraid of humans. They allow people to get very close to them and in many cases will walk straight toward a person if they are seated in the snow.

David met and photographed the Adélie while on an Antarctic cruise that stopped at Petermann Island. The penguins ran all over their colony, waving their flippers and carrying pebbles in their beaks. This species likes to have its picture taken, as long as the photographer keeps at a distance from its nest. David watched and photographed as they went about their daily routines and found it interesting how expressive the Adélie penguins were and how much they liked to show off their cute moves.