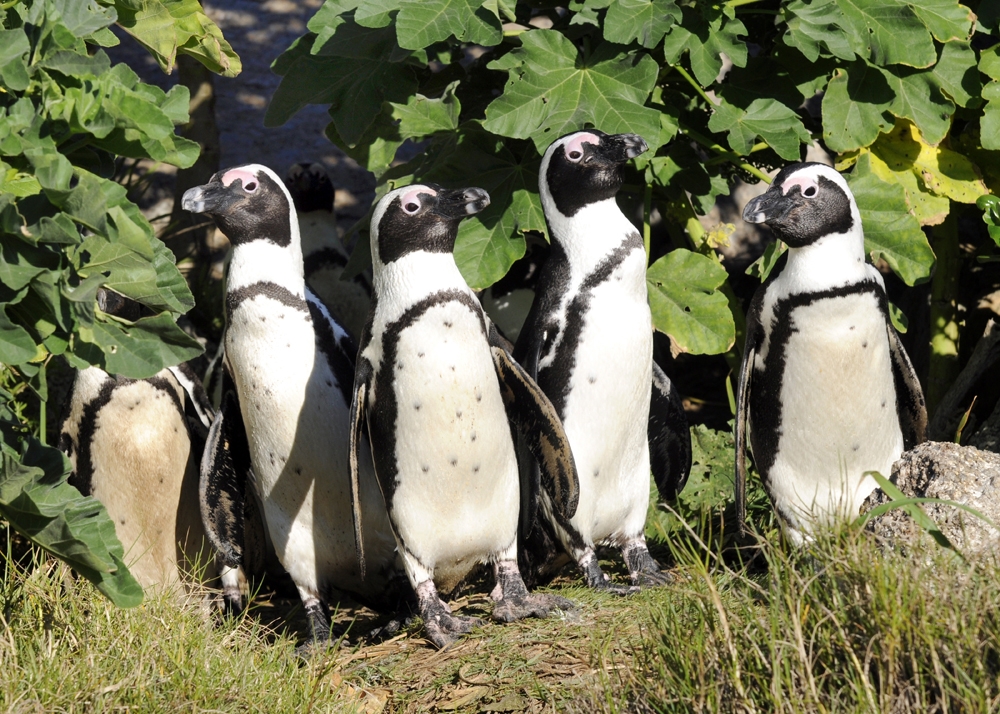 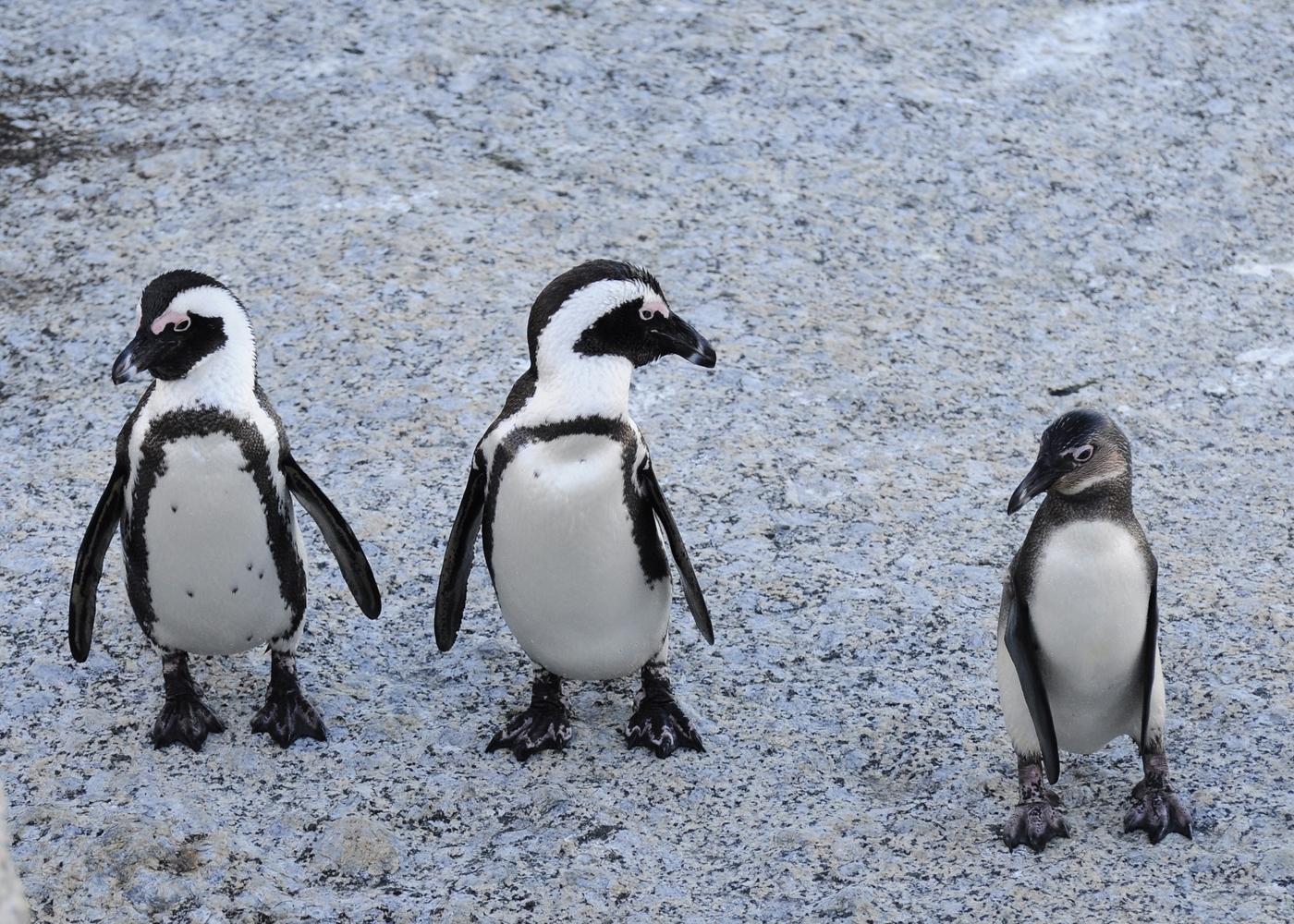 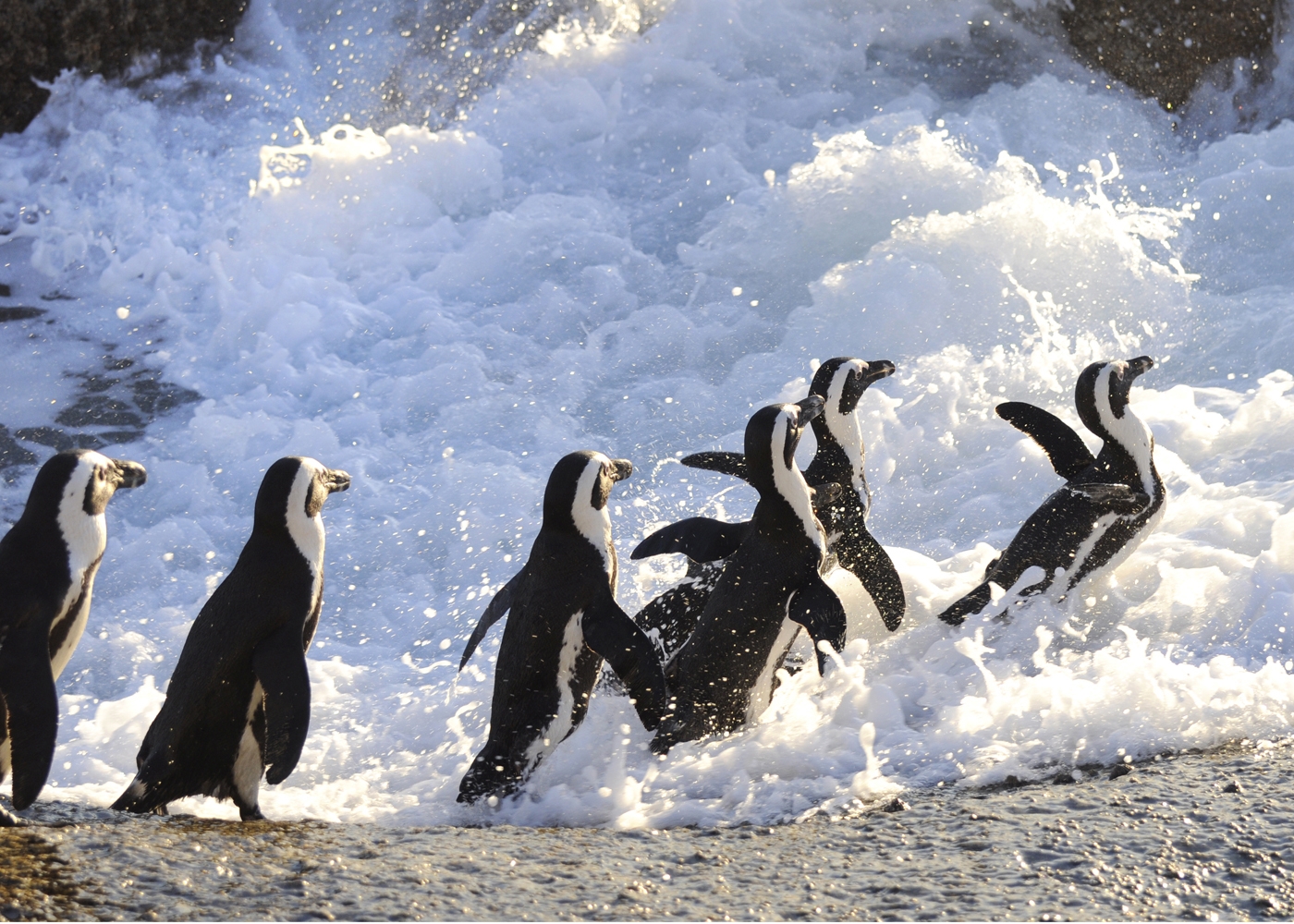 The African penguin is a mid-sized penguin. Like other species in the Spheniscus genus, it is characterized by its black and white bands. Its back is mostly black, while its underbody is mostly white, but its head and neck show a combination of black and white with some pink patches. Its most striking features are its two contrasting bands: one white, which circles its head to meet its white chest, and the other black, which wraps around its white underbody like an upside down ‘U.’ The African penguin’s head is mostly black except for an almost perfect semicircle-shaped white band. The white band is broken by a straight black line that extends from the back of the penguin’s head to meet its bill. Its dark brown eyes are surrounded by pink patches that resemble curved teardrops which extend toward its bill. The African penguin also shows some black spotting on its chest and other white areas. The number, location, and pattern of these dots vary from penguin to penguin, making it possible to distinguish individual birds. Its feet are black, stained with pink to white patches, and have large claws. Its flippers are black on the outside with a slight white trim on the leading edge and mostly black with white patches mixed in on the underside. Its bill is almost completely black, except for a faded white band about a third of the way from the tip. The immature African penguin is light gray in color on its neck and head, rather than black like the adult, and it has no pronounced bands. Chicks are covered in a brown to gray colored down.

The African penguin resides on the southern edge of the African continent and its surrounding islands. Its population is very hard to count because it breeds year-round and sometimes twice, so it may be present at the colony at any time. The African penguin’s largest colonies are found on St. Croix Island, Dassen Island, Mercury Island (Namibia), Robben Island, and Boulder Beach, South Africa. It can also be found on Halifax Island, Ichaboe Island, Mercury Island, and Possession Island, which are all off the coast of Namibia.

The African is the most popular penguin species in zoos. Listed below are just several of the places where you can see these adorable penguins:

The African penguin is different than most other penguin species because it has no fixed breeding calendar and may breed at any time of year. There is a peak in breeding during March in South Africa and November through December in Namibia. Eggs are laid soon after breeding. Parents alternate incubating duties until their 0.16lb (71.7g) chicks hatch about 38 days later. Parents care for their chicks for another thirty-eight days or so until they enter the crèche. Chicks remain in a crèche for thirty to forty days before fledging somewhere between eighty and one hundred twenty days old. African penguins do not fast for an extended period during their breeding cycles. Their fledging success rate varies from 0.4 to 0.7 chicks per nest depending upon their location.

Fur seals attack African penguins at sea. Seabirds are notorious for snatching the penguin’s eggs and chicks. Jackals and hyenas also pose some threat to the birds, but their number one threat comes from humans. Popular shipping lanes overlap with the African penguin’s foraging grounds and oil spills cause serious devastation. In addition to oil spills, overfishing of the African penguin’s prey (anchovies and sardines) leads to their starvation in lean years. As if this were not bad enough, humans have introduced alien species such as dogs, feral cats, rats, and mice to this species’ habitat. These animals destroy vegetation, damage nests, and even kill penguins.

African penguins at Boulder Beach do not fear humans. They are friendly and do not appear otherwise bothered by the presence of people, as they have adjusted to living in an urban area. They sometimes walk around and approach people and may even pose to be photographed from short distances. Their adaptation to human presence might depend upon their experiences. In areas where they do not encounter humans on a regular basis, they can become frightened and stressed.

Unfortunately, people are this penguin’s biggest threat. African penguins suffer greatly from past and present human activity, pollution, and introduced predators. Man, more than any other cause, is to blame for the rapid reduction in the African penguin population.

David visited the African penguins at Boulder Beach in South Africa. Boulder Beach is the most comfortable place to meet penguins. The motel across the street from their colony is pleasant and convenient. The penguins seemed happy, fighting much less than others he had visited. He watched each morning as they joined together to hike to the beach, and then preened themselves before entering the water. Sadness overcame David as he realized the perils and hardships this species faces.