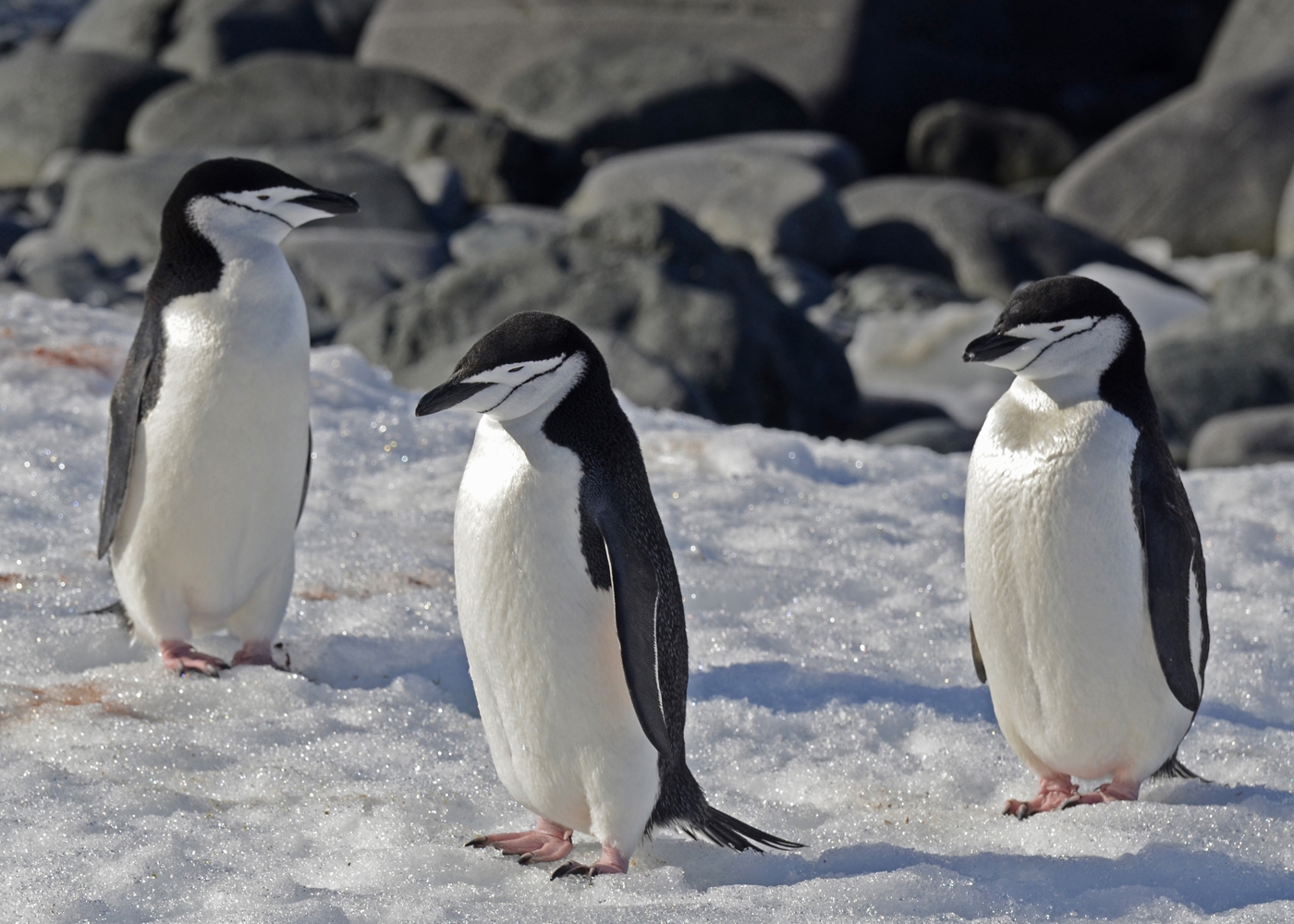 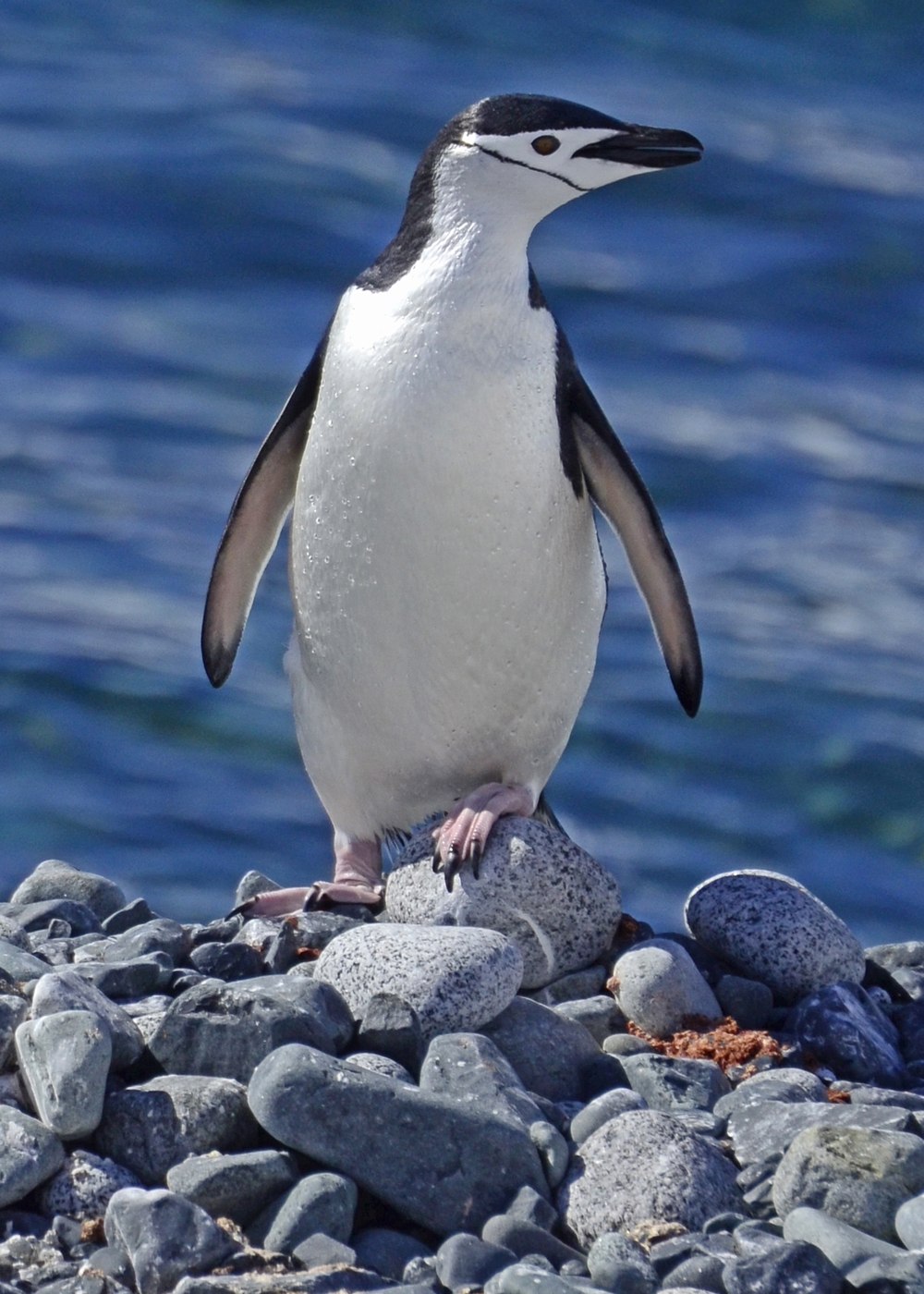 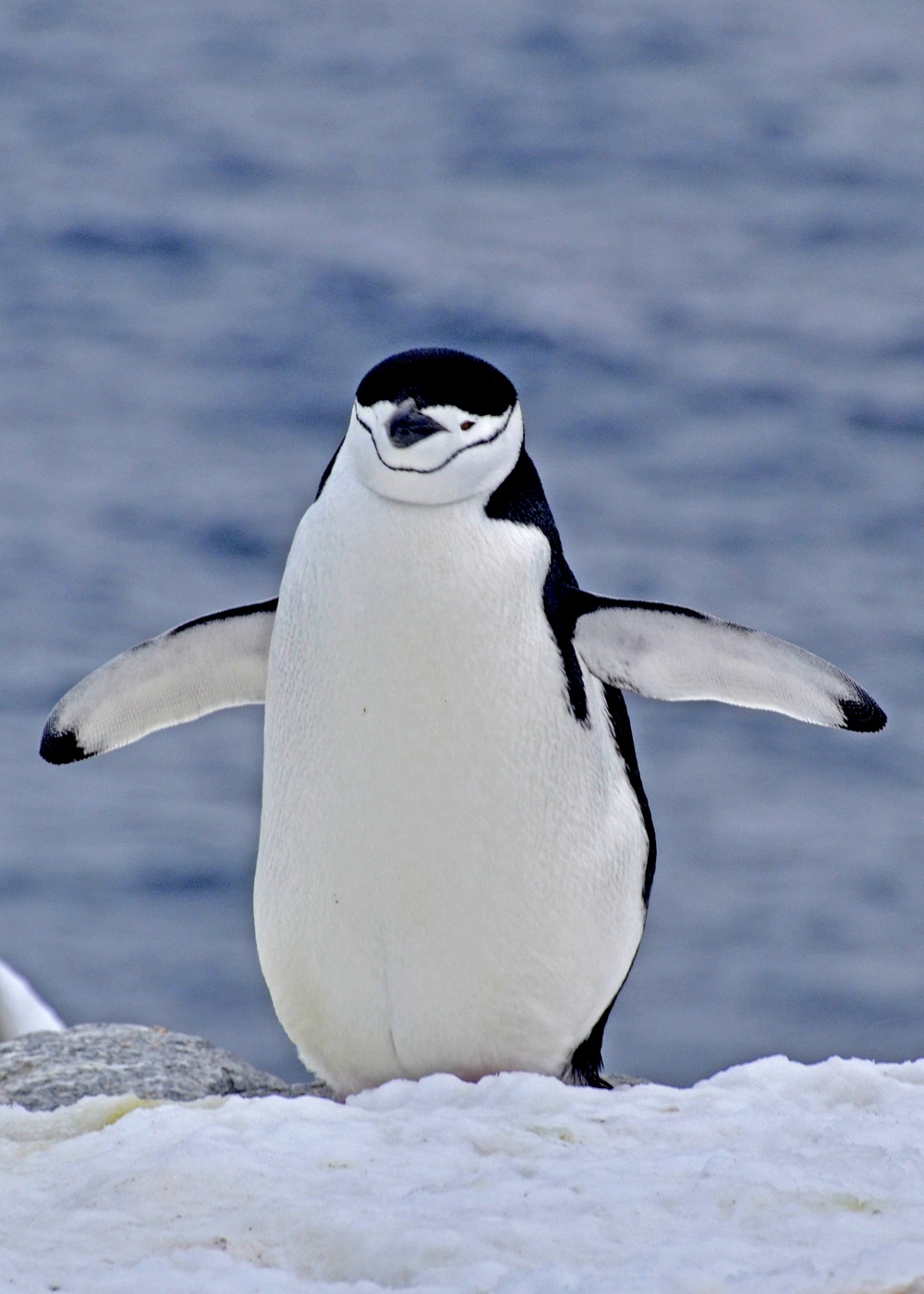 This medium-sized penguin has a large, elegant tail. The Chinstrap’s most striking features are the black on top of its head (resembling a tight hat), black patches surrounding both of its eyes, and a narrow black line that runs under its chin from one ear to the other (hence the name). Its chest and underbody are all white. This white extends up the penguin’s chin to just above its eyes and bill, covering half of its face. There is also a quarter-moon-shaped extension of white toward its ear. Because the white extends so far up its head, the black areas make the Chinstrap look as if it is wearing a Jewish Kippa. Its bill is almost all black but with some gray present, and it is surrounded by white plumage, making it more striking than that of other penguins. Its eyes are brown. Its feet are mostly pink with big black claws. The Chinstrap’s flippers are black on the outside with fine white lines along the outer edges. The insides of the flippers are mostly white with a few pink patches. An immature Chinstrap penguin’s facial features are not as well defined as an adult’s. A juvenile’s colors are a grayish to silvery back with a white underbody, but it does have some black spots on its face. Chicks are covered in gray down.

The Chinstrap penguin, the second most populous species, has numerous colonies spread out across a very large geographic area. Its largest colonies can be found in the South Sandwich Islands, South Shetland Islands, and South Orkney Islands. It also nests on the Antarctic Peninsula and surrounding islands. The islands that Chinstrap penguins choose to breed on are heavily populated with other penguin species. Some of these islands are Bouvet, Dellbridge, Adelaide, Gourdin, Deception, Clearance, Half Moon, King George, Livingston, and Penguin..

The Chinstrap penguin can be seen in zoos around the world.

Mostly krill and some fish.

The Chinstrap penguin’s breeding cycle is the shortest of any species, and it is highly synchronized. Males arrive at the breeding colonies in late October or early November, while the females arrive a short time later. Two eggs are usually laid between late November and early December. Parents take turns incubating eggs for thirty-three to thirty-seven days until they hatch. Both parents endure long fasting periods. Chicks are brooded for twenty to thirty days before entering a crèche. Chicks then remain in a crèche for about another thirty days. They enter the sea and fledge at about forty-nine to fifty-nine days of age. The normal fledging success rate is about 0.7 to 0.8 chicks per nest.

Leopard seals are the Chinstrap penguin’s biggest predator at sea, especially as they enter and leave the water. This species seems to have more trouble than others escaping the seals, especially in their juvenile years. Seabirds such as skua, petrels, and gulls attack young Chinstrap chicks and eggs, as well as sick or aging adults. Overfishing of krill has the greatest potential negative effect on the Chinstrap. Food shortages cause the penguin to have to forage at further distances and can lead to starvation of the adult birds as well as the chicks they are responsible for feeding.

This species likes to keep things simple, which means staying away from people as much as possible. It resides below the latitude of 56° S, which is not frequently visited by people, except for the expensive and more environmentally sensitive Antarctic cruises. Generally when they encounter humans, they accept their presence unless directly or vigorously approached.

Penguins, like people, judge others by their own yardsticks. They respect size; normally a smaller bird will shy away from a fight with a bigger penguin. It’s no surprise then that they respond to man just as they respond to other penguin. When a person stands, he is much larger than the Chinstrap; the penguin will notice and respect the larger animal. If a person lowers his height or lies down, the penguin will act as if he is given the right of way. Chinstraps are friendly and like to show-off their straps. They allow people to get very close to their nests and do not show any signs of being nervous, making them the perfect subject for photographers (but PLEASE always stay at least 20ft [7 m] away).

Desperately Needed: A comprehensive population survey.
Needed: Regulations on the fishing of krill.

David met the Chinstrap penguin during a cruise that stopped at Half Moon Island. It was a beautiful, sunny November day. The snow was fresh and deep. It was a calm but active day at the colony. Many birds were incubating, while others gathered stones for their nests. Sometimes David would catch a Chinstrap stealing a pebble from its neighbor’s nest. He had a great time photographing the birds. They were very photogenic and acted as if the humans weren’t even there. Watching them call to each other, he felt as if he had a choir practicing right in front of his camera.