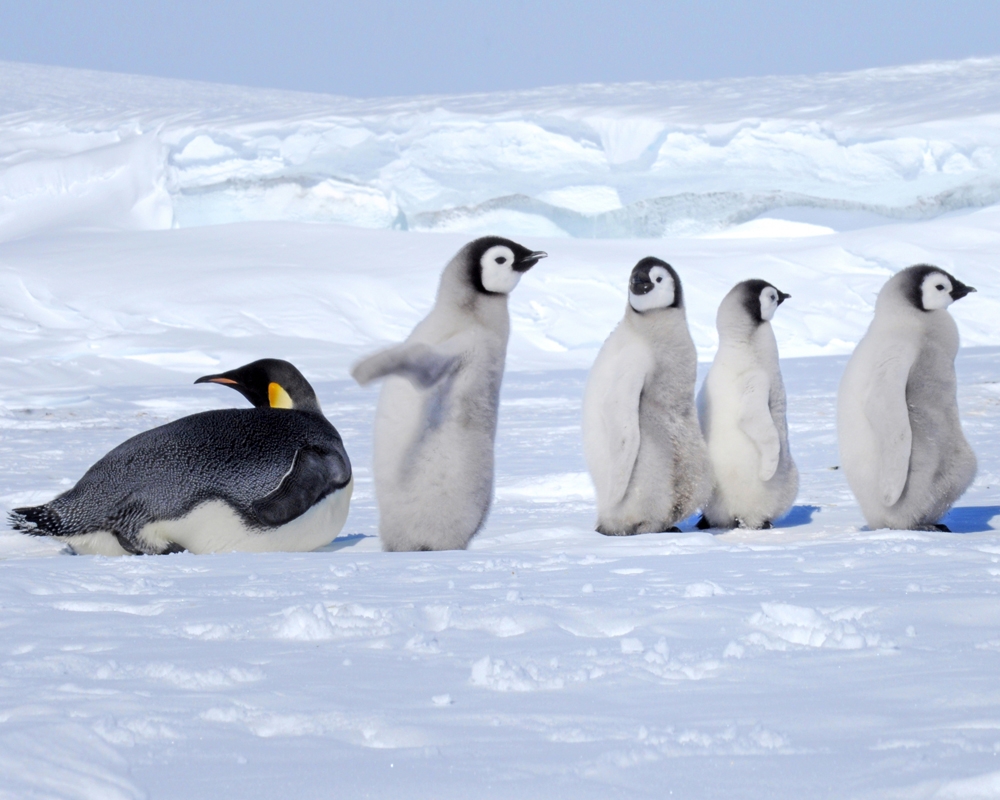 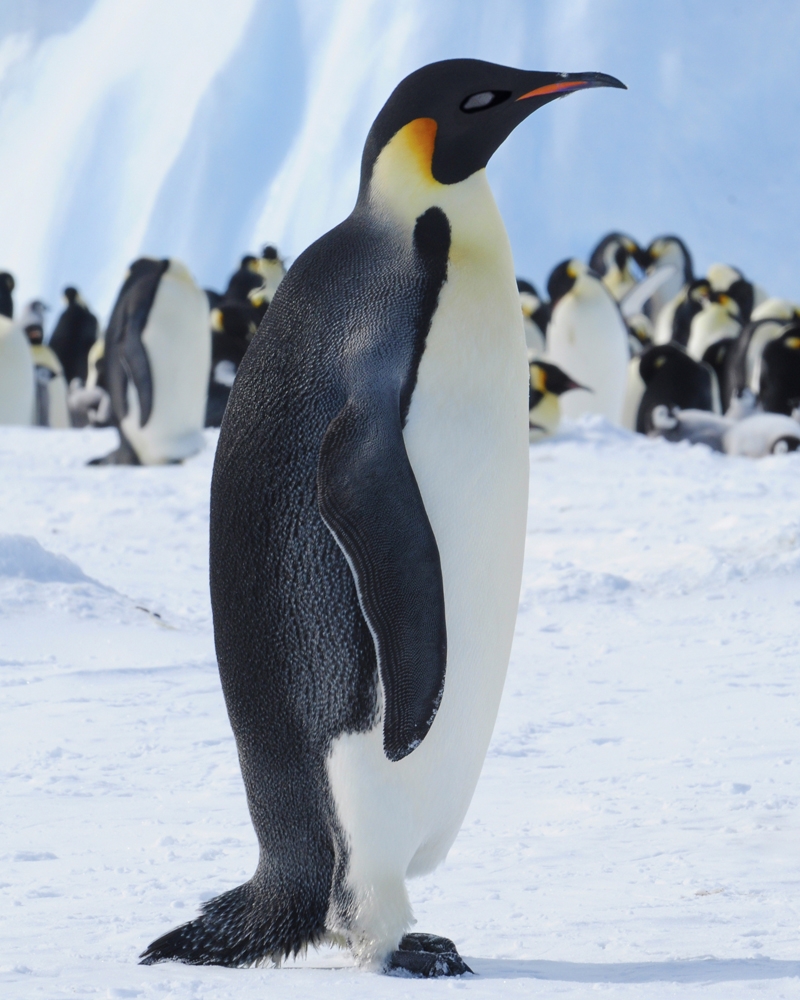 The adult Emperor penguin is the largest and most graceful of all penguins. Like the King, it features yellow to orange colors along with the standard black back and white underbody. Two of its most striking features are the yellow, almost orange, patches around each side of its neck and the colorful base of its beak. Its head is mostly black but interrupted by two large curves starting at each ear and connecting at the penguin’s chest. These markings fade from orange to yellow to white from the ears downward. The Emperor’s chest and underbody are almost all white but with some yellow on the upper chest. Its bill is mostly black except for the striking orange to pink line closer to the base. Its feet are black with large nails, and its legs sometimes have pink patches. Its flippers are black on the outside and white on the underside. Immature Emperors are not very different from adults, but the bright orange and pink are less defined. When very young, their chests may be all white and their bills all black, but as they grow, the brighter colors appear, and in time they match the adults. Chicks are mostly silver with black and white heads.

Emperor penguins breed on the fast ice that surrounds the continent of Antarctica. They form their rookeries in some of the coldest, most remote locations in the world. Their largest colonies are at Cape Crozier, Terre Adélie, Cape Washington, Coulman Island in Victoria Land, Halley Bay, Coats Land, and Queen Maud Land. There are at least forty-six known colonies surrounding Antarctica. Some of these are D’Urville Island, Dion Island, Beaufort Island, the Donovan Islands, Franklin Island, the Auster colony, and Taylor Glacier. The western Ross Sea area alone has at least six rookeries with at least sixty thousand breeding pairs. In a surprising discovery, researchers using satellite imagery located several Emperor colonies on frozen land.

The Emperor Penguin can be found in a very select group of zoos.

The Emperor penguin endures one of the harshest breeding cycles of any animal. It breeds during winter (beginning in early April) in one of the coldest places on Earth. Once it leaves the frigid water, it hikes on the Antarctic fast ice for up to three days, traveling up to seventy miles (110 km) before it reaches its colony. Unlike other penguins, the Emperor does not nest and is not territorial. It will breed at the foot of an iceberg or a hill. The female chooses its mate, usually not the same one as the year before. The mates breed and the female lays one egg in early May. The egg is put in the care of the male, so the female can forage, breaking her 45 day fast. The male incubates the egg for about seventy days while enduring extremely harsh weather, huddling with the other males for survival. The male is present when the chick hatches, but as soon as the female returns, he leaves to forage, after enduring an unimaginable 110 day fast. The chick is brooded for up to fifty-days, sitting atop its parents’ feet for protection and warmth. When brooding is over, the chick joins and remains in a crèche until it fledges in December at about one-hundred fifty days of age.

The Emperor penguin’s size, habitat, and distance from humans really helps in its protection. Because it is so large, it is less vulnerable to predation. Giant petrels have been known to steal the occasional egg or chick, but this occurrence is rare compared to with other species. The biggest potential danger the Emperor penguin faces is the melting of the ice shelf on it breeds. So far, the accelerated melting of ice has been an Arctic phenomenon and has not happened around Antarctica. However, if global warming continues at its current rate, it is just a matter of time until it affects the ice on which the Emperor breeds. No one can say for certain what will happen to the Emperor penguin if the ice disappears.

Emperors have been fortunate enough to have not encountered many humans in the past because of the harsh areas in which they live, where it is nearly impossible for man to survive. The few explorers they encountered, who were traveling to the South Pole, did hunt Emperors and collect their eggs.

Today only a few Antarctic expeditions ever reach the Emperor rookeries, as the journey requires an ice-breaker and a helicopter. Even with both at the ready, these trips can be quite difficult. Quark Expeditions, the company which organizes the Snow Hill expedition, is notorious for getting its ice-breaker stuck for days at a time.

If you are one of those lucky few who can afford to reach an Emperor rookery, you will be greeted by friendly penguins that will treat you just as you treat them. A single penguin crossing your path in its long walk to the sea might think that you are just a different species of penguin. It will stand in front of you at a safe distance, less than fifteen feet (4.6 m), assessing your reaction. If you relax your posture and look aside, it will understand that you are giving it the right of way. It will then walk right in front of you toward its destination. If you stand at attention and direct your nose toward its face, it will lay on the ice and wait its turn while you take the right of way. Emperors are quite polite!

Desperately Needed: Better understanding of the condition of Antarctic ice and how it is affected by global warming.
Needed: Regular population surveys

David took a cruise on an ice-breaking ship to meet this penguin. After terrible weather and getting stuck in the ice for days, David was able to make one helicopter trip to the Snow Hill penguin colony. The helicopter landed on the most beautiful Antarctic day imaginable. The sun burned bright and the penguins were active. They continued with their routines as if no one was watching. David could see the hungry adults that were patiently waiting for their mates to return so they could go forage. Other penguins had just returned from the sea, and chicks fought to be fed by them. The Emperor was the most impressive penguin David ever met and had the cutest, most lovable chicks. That day will remain with him forever.