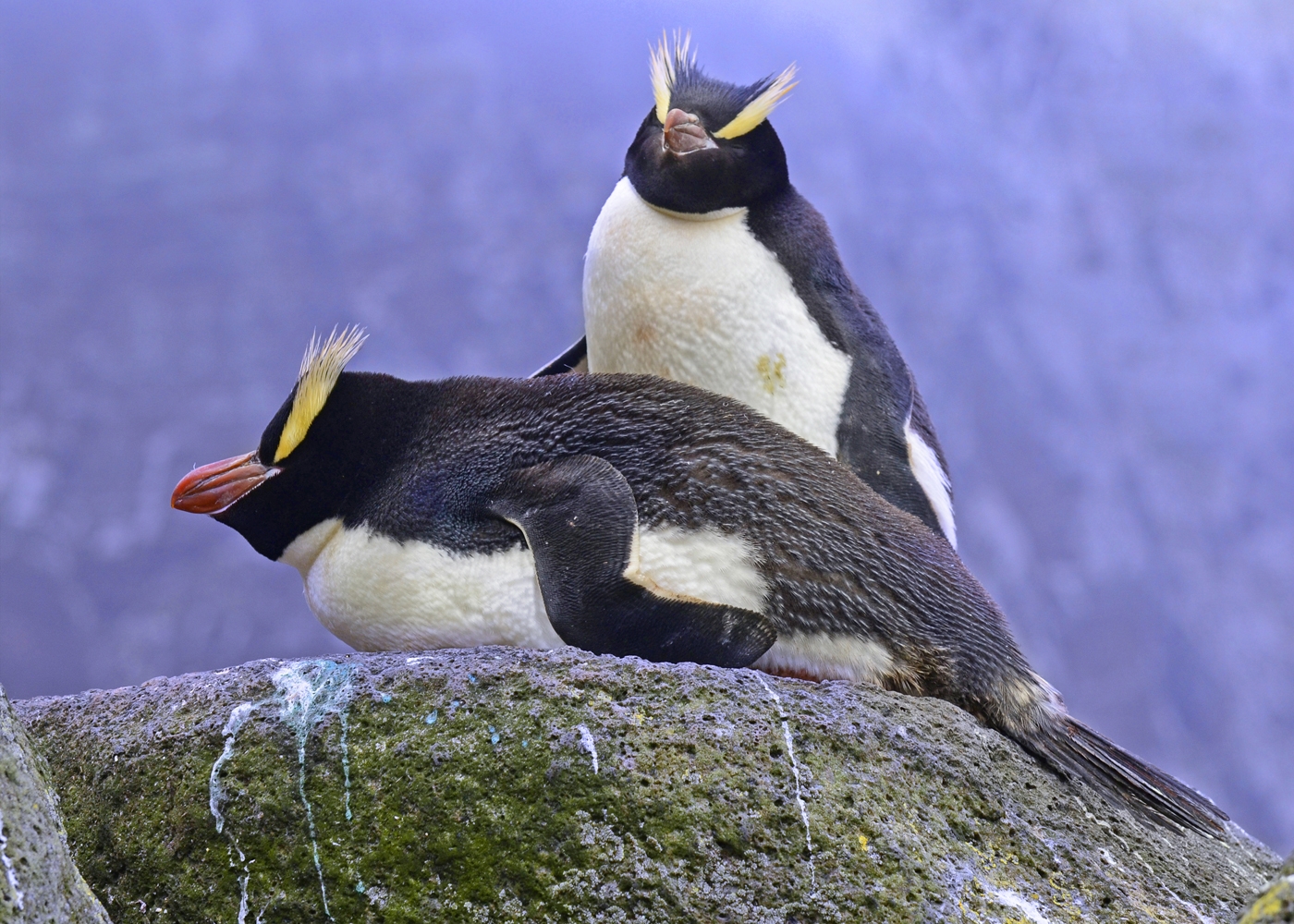 Severely declining; however, like other New Zealand sub-Antarctic species, information is scattered and the exact trend is unknown.

The Erect-crested penguin’s appearance is similar to that of the Snares and the Fiordland-crested, except that it is larger than both and possesses a distinctly different crest. Its most noticeable feature is its wide crest, which begins above its bill and rises up toward the back of its head. Unlike with the Snares penguin, when seen from above, the crest looks like two parallel lines. This penguin has control over its crest and can raise and lower it at will. Starting at the base of the crest and continuing in the other direction are skinny, pink lines of bare skin that surround its bill. The orange or red color of the bill is less prominent than that of other crested penguins. Its iris is brown, rather than the striking red color of the Snares-crested penguin’s iris. The rest of its head, back, and chin are black. The transition from black to white at the top of its neck is similar to the Snares penguin’s and looks like a baby bib. For its body size, its flippers are proportionally longer than other penguins’. They are colored white on the inside with a wide, black edge that widens even further around the tip. The Erect-crested penguin’s feet are pink to white with black soles. An immature Erect-crested is thinner than an adult and has,a smaller bill, a much smaller crest, and gray coloring on its face and neck. Chicks are covered in a chocolate and white down.

The Erect-crested penguin breeds on two small, isolated island groups about 500 miles east of New Zealand. These are the Antipodes Islands, whose largest island is about six square miles, and the Bounty Islands, which are less than one square mile in total area. The Government of New Zealand prohibits landing on these islands.

The Erect-crested penguin cannot be found in any zoos.

The Erect-crested penguin’s diet has never been researched, but it is presumed to eat mainly krill and squid.

Very little research has been done on the Erect-crested penguin’s breeding cycle. It arrives at its colony in September. The female lays two eggs in early to mid-October. Parents share incubation duties for about thirty-five days until the chicks hatch. Both parents fast for more than 30 days. The male has two long fasts during the breeding cycle. The chick is brooded for about twenty days until entering a crèche. It remains in the crèche until it enters the water in late January or early February, fledging at seventy days of age.

It is not fully known why the Erect-crested penguin’s population has dropped. Scientists believe it may have a lot to do with their prey. Rising water temperatures, disease, pollution, and changes in water composition are just some of the factors that affect the prey of this penguin. As the sea creatures on which it feeds move farther away, are overfished, or die out, the Erect-crested penguin is forced to travel farther distances to eat or otherwise go hungry. It is also faced with common penguin predators such as sea lions, seals, and seabirds. Without more research, we will not be able to know the exact cause of its drastic decline.

In the past, extensive seal hunting took place on both the Antipodes Islands and the Bounty Islands, which without a doubt inflicted damage on the penguin habitat by introducing animals and destroying vegetation. There are also records of New Zealand merchants trading for Erect-crested skins. Warham in 1972 wrote that the survivors of the “Spirit of the Dawn,” a ship that wrecked at Antipodes in 1893, mainly survived on penguin meat and eggs. For the past hundred years, this species has had very minimal contact with humans, and now, except for a small number of researchers who are allowed, people are strictly prohibited from landing on these islands. Needless to say, not having direct contact with man does not make this penguin immune from man’s harmful actions. They are still affected by overfishing, global warming, and chemical changes taking place in our oceans.

Desperately Needed: Regular and consistent population surveys; A study on the Erect-crested penguin’s breeding cycle and foraging; Prohibition of fishing around the Bounty Islands and Antipodes Islands.
Needed: Pathobiology studies to try to pinpoint the cause of this species’ decline.
Less Severe: General studies to gain information on this species, which is the least-studied penguin.

David traveled to New Zealand to meet the Erect-crested penguin. After promising he would not step foot on the island, David hired a boat named “The Tiama” and its captain Henk to take him to Antipodes Island, accompanied by a group of researchers. After almost three days of sailing, the island came into view. David and his captain boarded a small inflatable boat and headed closer. They circled the island for hours, photographing the rare penguin. The penguins were very lively, some jumping off rocks into the sea, while others climbed up a steep hill to feed their chicks. Many were still bonding with and calling out to their mates. The voyage to Antipodes is the most daring of all the expeditions David has taken to photograph penguins.