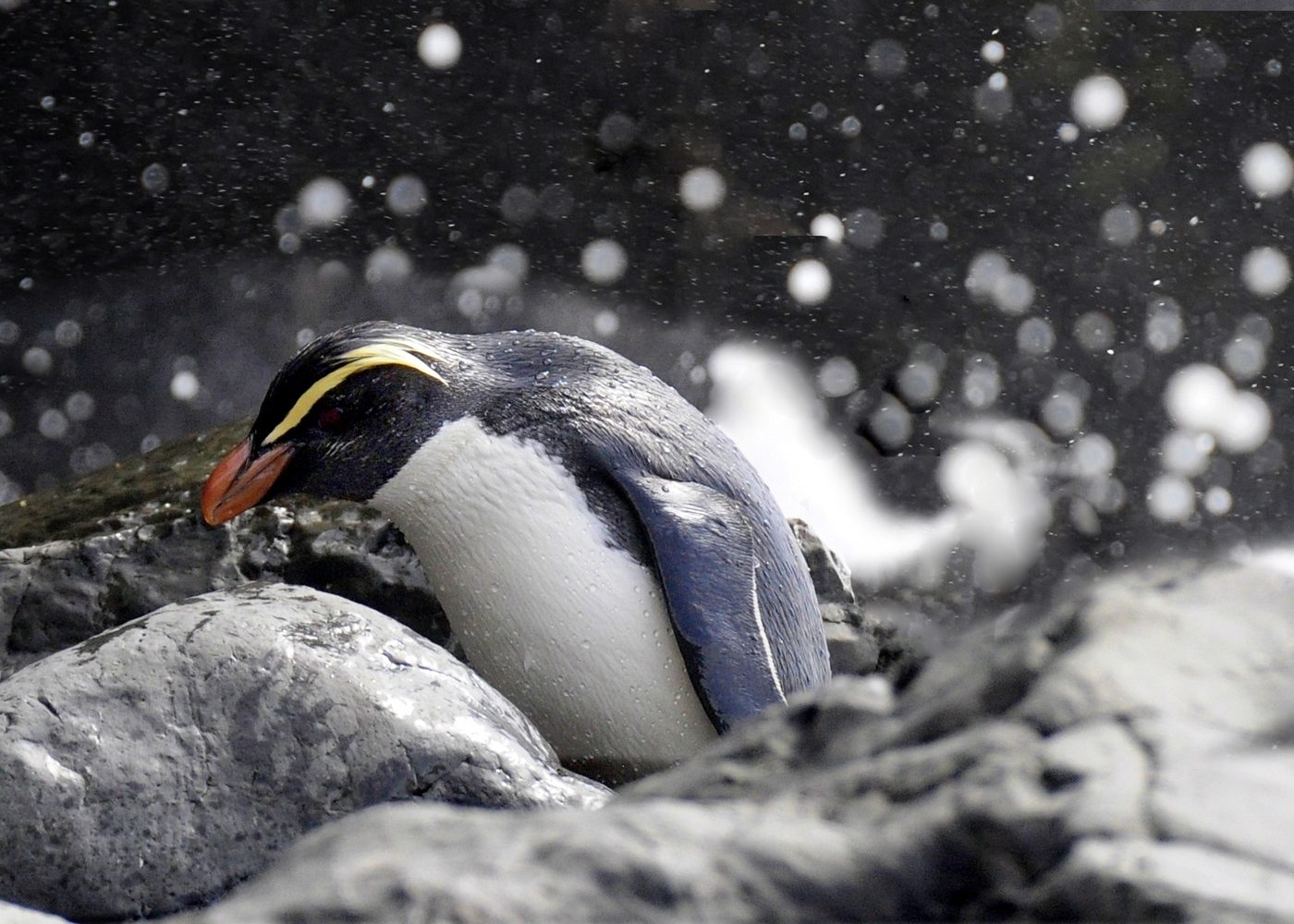 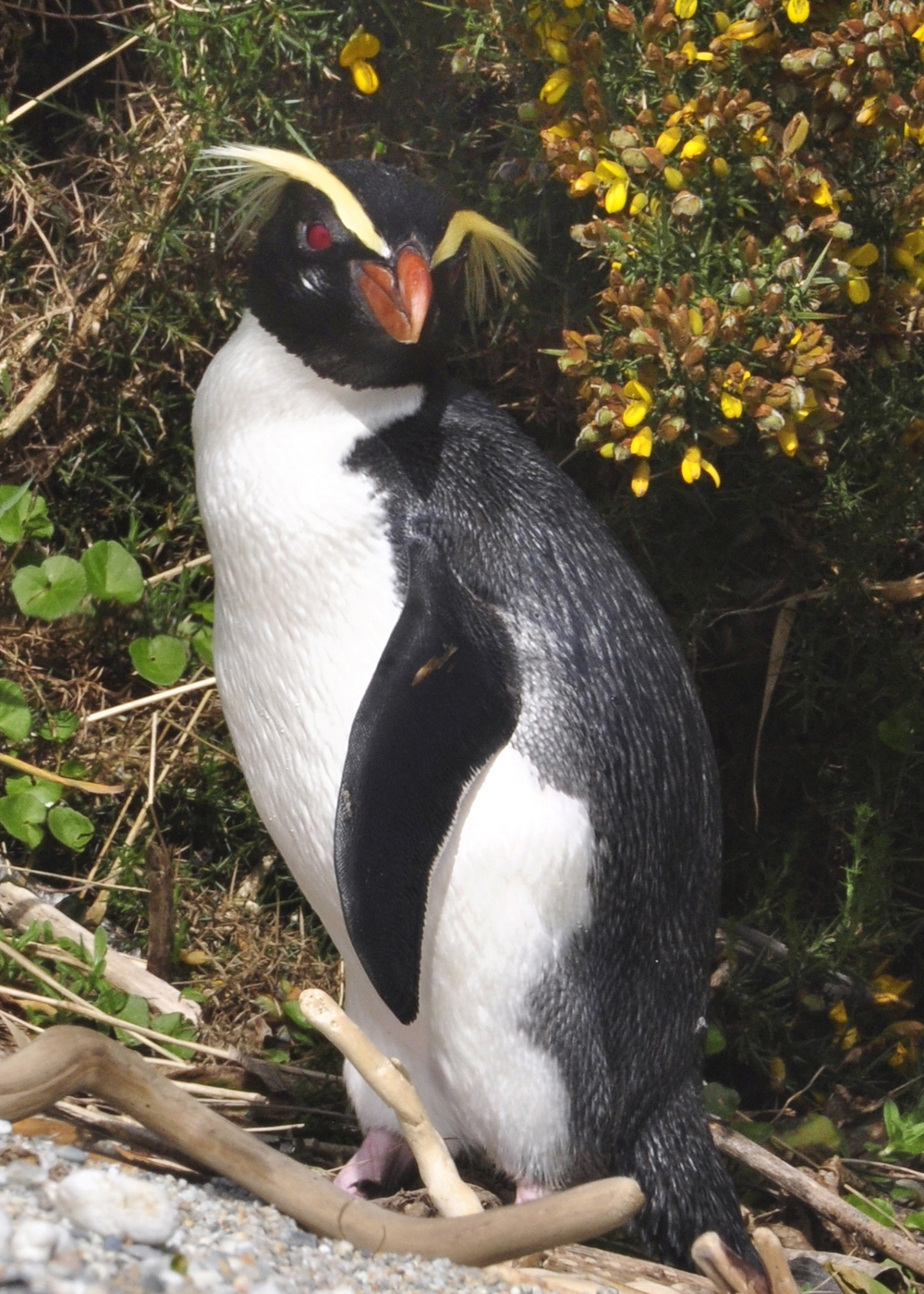 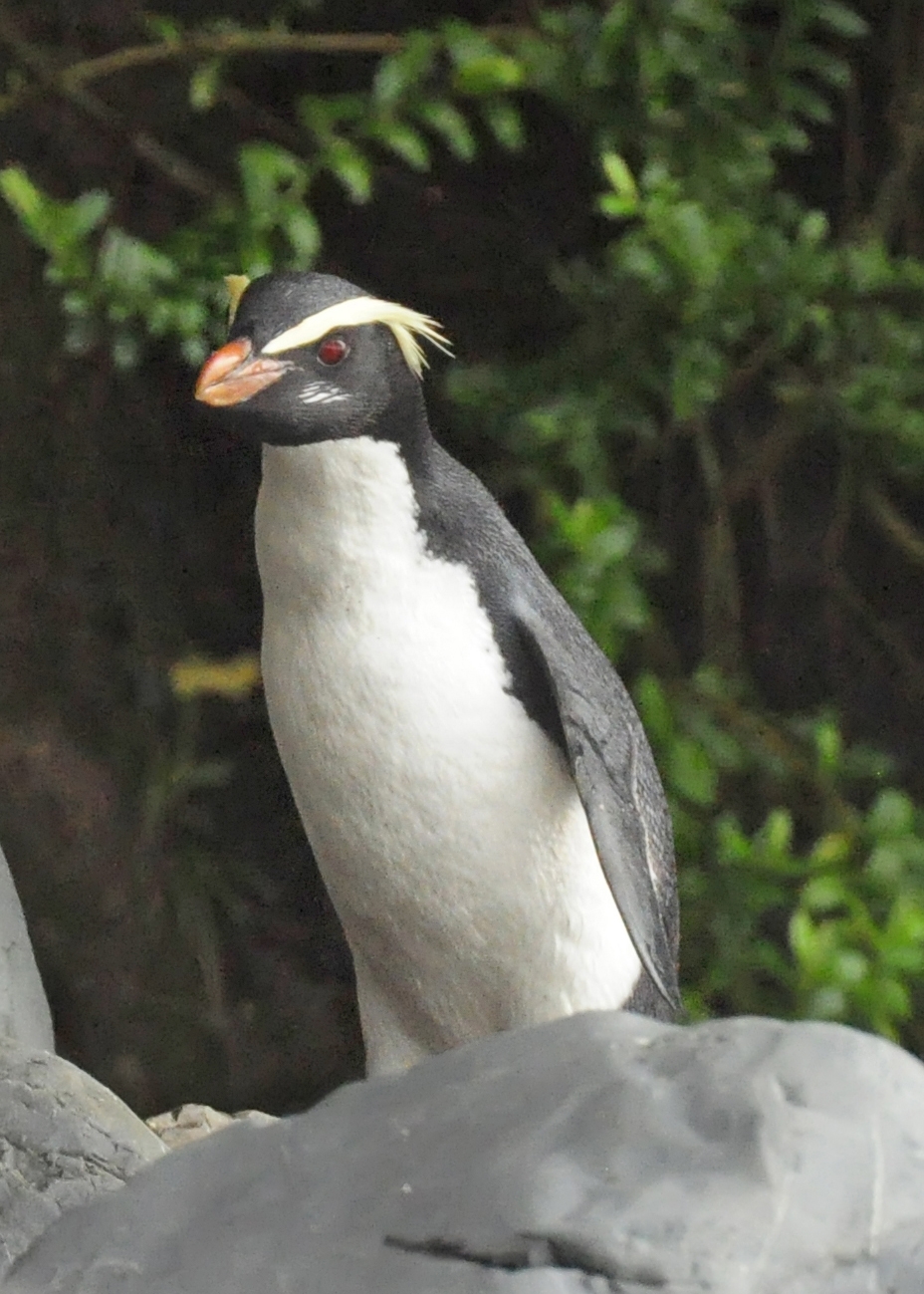 The Fiordland penguin is one of only three species with a total population of less than 10,000 birds, making it extremely vulnerable. There are no good or recent population studies, and it is assumed that the population is holding steady in most places but declining in others.

The Fiordland penguin is similar in appearance to its closest relative, the Snares, but does not have the featherless pink edges around its bill. Like other crested penguins, its back is dark blue to black. Its long, yellow crest curves over its eyes and ear areas. In addition to the main crest, there are smaller yellow strips toward the center of its head. Its head is black with shades of very dark blue. This species is easily distinguished from all other crested penguins by the short and narrow white stripes on its cheeks. Its underbody is white all the way up to its neck and when seen from the side, it curves in an “S” shape from above its leg to below its chin. Its bill is mostly orange except for a yellow line and areas of gray to black stains. The Fiordland penguin has red eyes. Its feet are very long and are mostly pink with big black nails and black to dark brown soles. Its flippers are black on the outside and pink to white on the inside surrounded by black edges that vary in width. An immature Fiordland has a brown bill, a much smaller crest, brown eyes, and a gray to faded white chin. Chicks’ down feathers are dark gray for the first week or two and then turn a lighter gray.

The Fiordland penguin can be found nesting in the Fiordland Region (hence the name) on the west coast of the South Island of New Zealand and on Stewart Island, New Zealand. It prefers to nest in dense forest and vegetation within close proximity to the beach, so these areas with a narrow coastline provide optimal conditions. A few specific locations at which they breed are Jackson Head, Preservation Inlet, Yates Point, and Lake Moeraki Beach.

The Fiordland penguin cannot be found in any zoos.

Like its close relatives in New Zealand and the New Zealand Subantarctic Islands, the Fiordland penguin has not had its breeding cycle thoroughly studied. It arrives at its colony in late June or mid-July. The female lays two eggs between late July and August. Both parents share the duty of incubating the eggs, which allows one parent at a time to forage at sea. The incubation period lasts about thirty-five days. The second egg is significantly larger than the first egg and is the first to hatch. The first egg is usually abandoned. In the rare instance of two chicks hatching, the chick from the first egg is left to die of starvation. Both parents fast for more than 30 days at a time, with the male enduring two fasting periods during incubation. The male broods the chick while the female feeds it for two to three weeks before it enters a crèche. The chick remains in the crèche until it fledges at about sixty-five days of age. The Fiordland penguin’s fledging success rate is about 0.5 chicks per nest.

On land, the Fiordland penguin is fairly safe from predators. Because it nests in such dense vegetation, it is hard for predators to attack its nest. Storms and flooding can cause damage to eggs and wet chicks’ down, which is not waterproof. At sea, the dangers the Fiordland penguin faces are less known. Fur seals have been known to eat penguins in the area; however, Fiordland penguins suffer from less predation at sea than do most other penguins.

Fiordland penguins have suffered from human activity less than other penguins have because their habitats are in areas that are sparsely populated, yet they are more frightened of humans than are other species. On one colony where they were studied for several years (unlike in other locations), the Fiordland penguins tolerated the researchers, as long as they did not move abruptly. There they did not desert their nests even if a researcher touched the egg or chick. In other locations, one has to be very careful when encountering a Fiordland near its nest, as females are so timid that they easily may flee the nest if a person approaches it, even before the person notices the penguin, causing harm to the eggs. Males will stand the nest more tenaciously, but it is almost impossible to differentiate between a male and a female. Fiordlands do not have a good reason to be so scared of humans, as their habitat is probably less polluted than any other penguin’s that lives near a human-populated area. Also, the area’s thick vegetation largely remains in its virgin state. No logging or farming takes place in the vicinity of this penguin’s known colonies.

David drove from Dunedin to the Lake Moeraki Beach Lodge to meet the Fiordland penguin. At the lodge, he was cheerfully greeted and shown the way to the beach, where the penguins enter and arrive at their colony. David was shocked when he arrived at the shore and saw not even one penguin present. A penguin eventually came down from a cliff, saw David, and ran back up. More than twenty minutes later, he appeared again and made a mad dash for the water. The same thing happened with a penguin returning from sea. Over his entire two-day stay at the humid beach, David saw very few penguins. Each one that he did see panicked when he raised his head and clicked the camera. He then realized that the Fiordland is very uncomfortable with human presence.