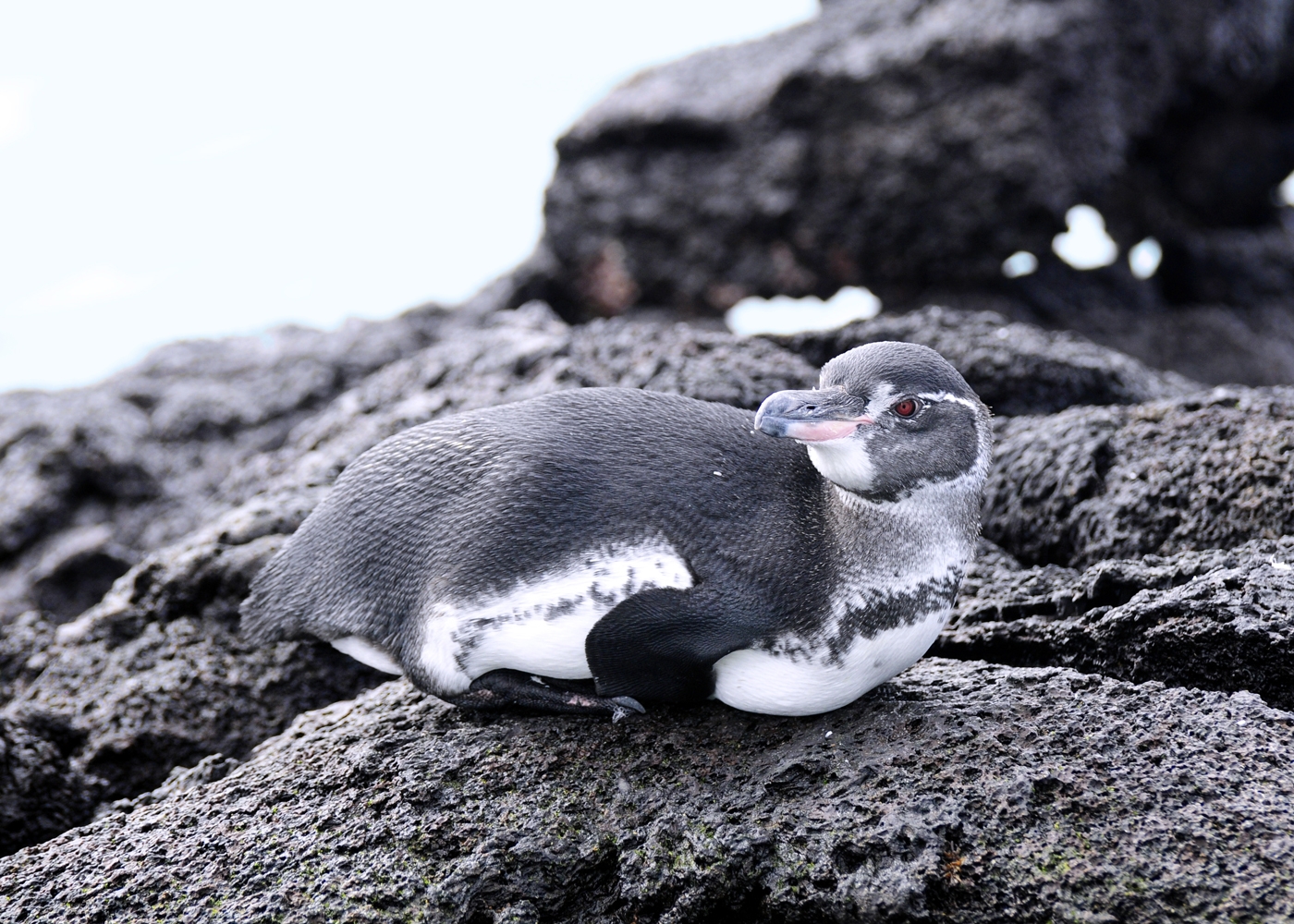 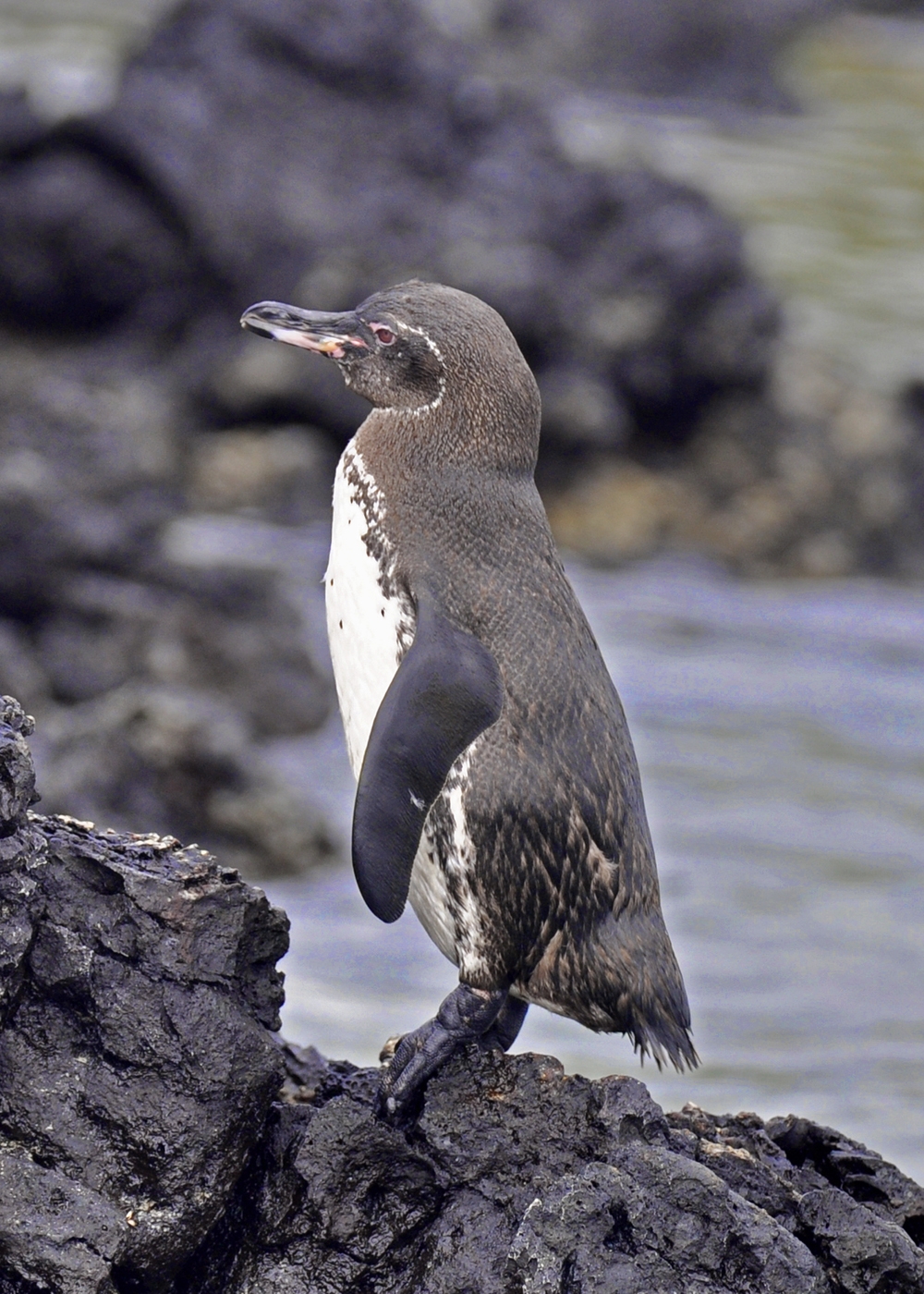 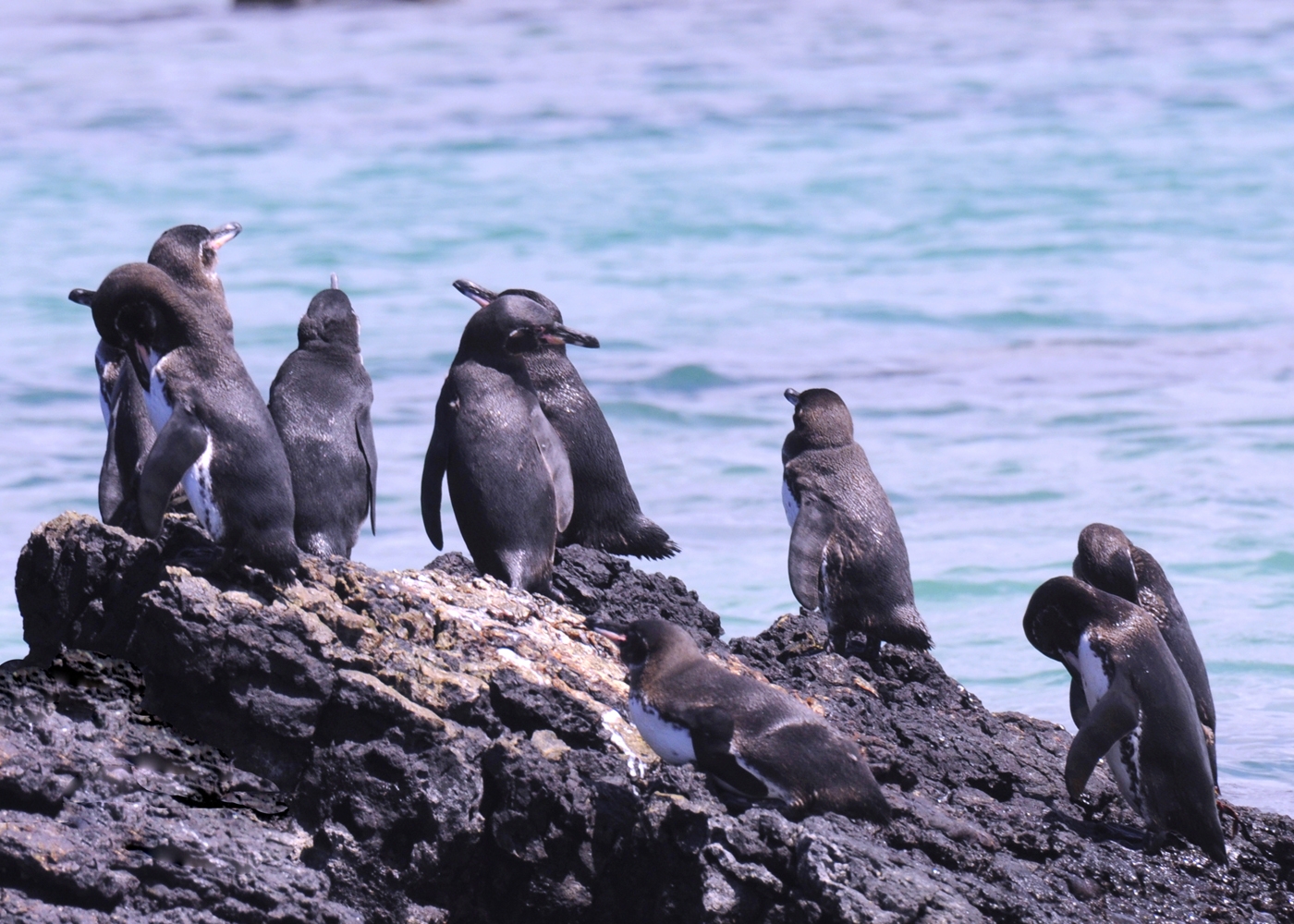 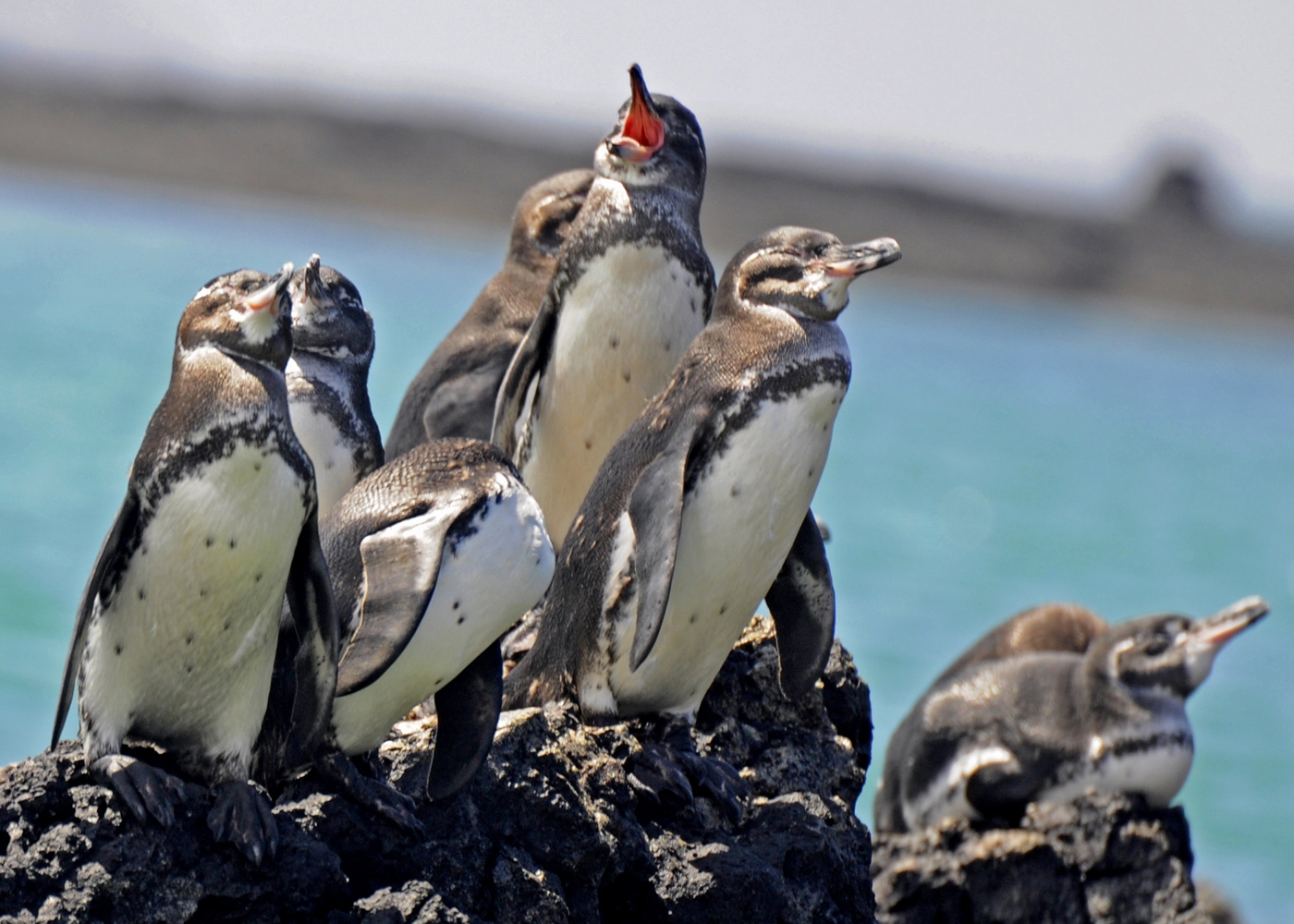 The Galápagos penguin looks similar to the other species in its genus (the Magellanic, African, and Humboldt penguin), except that it is noticeably smaller. On the adult Galápagos, the head is black and the chin white. Over each eye runs a very thin white band that then goes behind the ear and to the back of the head, turning into what looks like a fancy necklace as the bands meet on the front part of the neck. On the penguin’s face there are small featherless pink patches of skin around the eyes and under the bill. This feature is more noticeable during the breeding season. Its neck is black and its underbody, which is smaller than that of other banded penguins, is white. One black band appears on its upper breast and curves like a horseshoe down its sides, but it is not well-pronounced like that of the Magellanic. Its borders are blended with white and look uneven or broken. Like African and Humboldt penguins, the Galápagos has distinct black dots on its underbody. These black dots vary from one Galápagos to another, allowing researchers to identify specific individuals. Its flippers are black on top as well as most of the underside, where a pinkish-white heavy line is also present. Its bill has a complicated, albeit unattractive, color scheme. Its upper mandible is gray with a black hook at the tip. Its lower mandible is black, gray, and pink, with black again at the tip. When combined with the black hook on the upper mandible, it appears as though there’s a black ring around the tip the Galápagos penguin’s bill. It has brown to red colored eyes. Its feet are black with a few pink spots. An immature Galápagos has no bands and has a mostly black back with a faded gray to brown head and neck. There are also no bald pink patches on its face, and its irises are pink to red, rather than the adult brown to red. Chicks are covered in a gray down.

The Galápagos penguin can only be found on the Galápagos Islands, Ecuador, which are located about 525 mi (845 km) west of South America. It lives closer to the USA than does any other penguin species. Living right on the Equator, this penguin breeds in a warm tropical environment. The majority of Galápagos penguins breed on Isabela and Fernandina Islands, with some also breeding on Santiago and Bartolomé. They are the only penguins that occasionally cross a few miles into the Northern Hemisphere.

The Galápagos penguin cannot be found in any zoo in the world.

Small fish such as mullets and sardines.

Like African and Humboldt penguins, Galápagos penguins do not have a regular annual breeding period, though peaks have been observed between April and May and between August and September. Studies show that breeding activity increases with cooler water temperatures. Since the population is in distress, 50% of pairs breed twice a year, while the rest breed twice in a fifteen-month period. This busy breeding schedule sometimes collides with molting, and if either mate begins molting, breeding is postponed. Females lay two eggs of similar weight. Incubation lasts 38-40 days. The nest success rate normally averages a high1.3 chicks per nest, but a major El Niño year can devastate nest success.

Despite all their troubles and dwindling numbers, Galápagos penguins are the least in danger of predation by other animals of all penguin species. On land, the Galápagos must face introduced species such as dogs, cats, and rats. But the greatest challenge facing this penguin is not its predators but the environment around it. The El Niño phenomenon greatly reduces this penguin’s prey. This forces the bird to forage at further distances, leading to low reproduction success, widespread starvation, and eventual death for adults. Scientists believe global warming increases the occurrence and strength of El Niño. They believe that it is this climate change that will finally drive the Galápagos penguin to extinction. Also, the Galápagos Islands have several active volcanoes and their eruptions damage the environment and vegetation, causing harm to wildlife and penguins in particular.

Galápagos penguins are not fearful of people, but government rules prohibit people standing on the rocks with them or landing where they congregate. Galápagos penguins’ behavior can only be observed from a boat at least ten feet away (3m). There are no visible signs to suggest nervousness in the penguins; they continue their normal routine, seemingly happy to be photographed. The natives understand the importance of protecting the birds, but the rapid population growth of people on the main islands, as well as satellite islands such as Isabela, causes grave dangers.

Desperately Needed: A massive and comprehensive plan to block off a large section of the ocean around Isabela Island in order to create a zoo-like environment which would include the occasional adding of fish.

Needed: More effective and better-enforced pollution bans; Fencing or walling around breeding colonies to deny access to introduced predators; A zoo-like habitat built to maintain the species if all other efforts fail.

Reaching the Galápagos Islands from the United States was the shortest trip David had to make to photograph penguins. David flew to Santa Cruz Island and then took a short boat ride to Isabela Island. It was 90°F (32.2°C) by the time he reached the island, not the climate in which you would ever expect to find a penguin. The boat circled the island, and David spotted quite a few penguins nesting on rocks close to the water. David watched as they jumped in and out of the water, thinking how sad it was that in a few years they might all be gone. The penguins never showed any signs of stress or fear, and they were unusually timid toward each other and friendly toward people. The biggest problem, as Henry the boat driver stated, is that most visitors only come to Isabela to meet the penguins. The penguins do their part by staying on the rocks, but their dwindling numbers are frightening anyone who cares for the penguins. “I am glad you came now,” Henry said. “If you’d waited five more years, it is quite possible you would have missed them.”