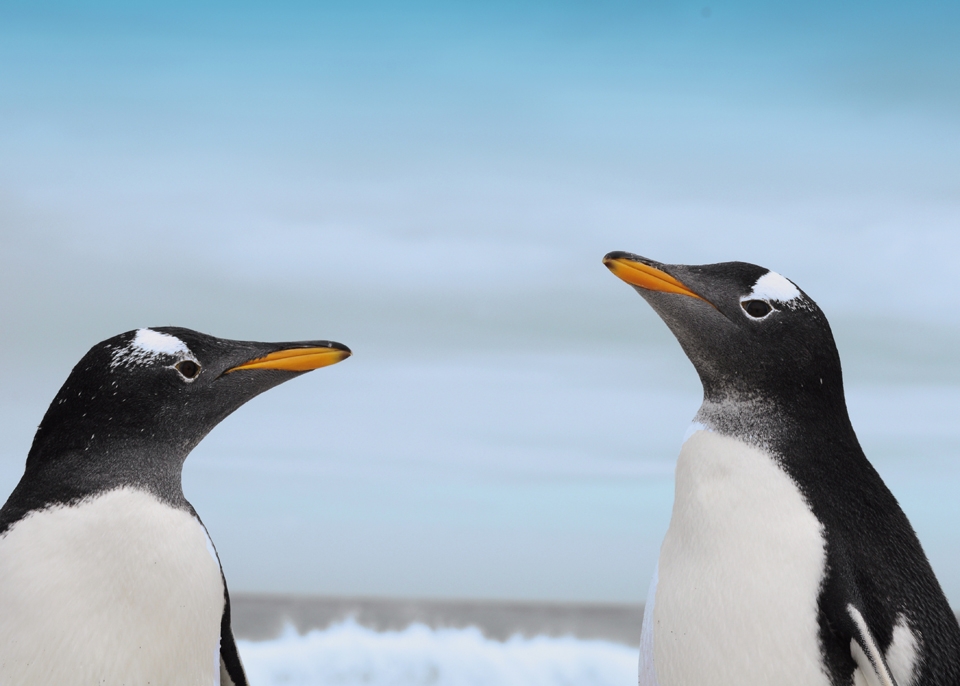 The Gentoo is the third largest penguin. The Latin name of the Gentoo penguin’s genus is Pygoscelis, meaning “brush-tailed.” When looking at an adult Gentoo, its three most noticeable parts are its long tail, bright-orange feet, and orange bill. Most of the Gentoo’s body is either black, dark brown when worn, or a very clean white. Its lower chest and underbody are white. Its back, head, and neck are all black, except for two white patches ending with dots, as well as a thin white circle around each eye that makes this penguin look as if it is wearing makeup. Its bill is almost all orange except for some black on the upper mandible. Its flippers are black on the outside with a white trim on the edge, and they are almost completely white on the underside except for a few black patches on the ends. The Gentoo has brown eyes and orange to light yellow feet. An immature Gentoo penguin is very similar to an adult in size and appearance. Its chin and throat are whiter, and the intensity and distribution of the color above its eye patches is less concentrated. Also, its bill color may be duller, and the black parts may be dark brown. Chicks have gray and white down.

Gentoo penguin colonies are spread over a large geographic area and can be found in a circle around the southern part of the globe. They are in a wide band as far north as 46°S and as far south as 65°S. There are two subspecies of Gentoos. The first, Pygoscelis papua papua, lives in the northern colonies such as those in the Falkland Islands and South Georgia. The second, Pygoscelis papua ellsworthii, lives in the southern colonies such as those on the Antarctic Peninsula and the South Sandwich Islands. The largest colonies can be found in the Falkland Islands, Heard Islands, Crozet Islands, South Sandwich Islands, South Orkney Islands, South Georgia Island, and Macquarie Island. There are also large colonies on the Antarctic Peninsula and the surrounding sub-Antarctic Islands. The Gentoo penguin will share its colony with other penguins and is frequently found next to a variety of species. Because of its larger size, it might evict another species from its nest.

Due to their vast geographic range, the Gentoo penguin’s breeding calendar varies greatly. In the Falkland Islands, Gentoos mainly breed in the summer, laying eggs around October 30th. In the South Indian Ocean colonies, unsynchronized breeding occurs in the winter. Incubation duties are shared by both parents. Incubation lasts about thirty-five days before the chicks hatch. The parents take turns brooding the chicks for about thirty days before the chicks enter a crèche. Once at fledgling age (65 to 85 days), unlike all other species, the chicks are not immediately deserted by their parents. For the first couple weeks, the young birds take short trips to sea before starting their long maiden trips, and parents have even been witnessed feeding their offspring after they return from their first trips. Gentoo penguins do not endure long fasting period during the breeding cycle. Their fledging success rate is 0.7 chicks per nest, but it can fall to 0.3 chicks per nest during rough years.

Flying birds such as skua and caracara attack eggs and young chicks. The Gentoo penguin is not good at defending against these attacks. These flying seabirds have also been known to cause a distraction when a parent is feeding its chick, causing food to spill on the ground that the bird can steal. Sea lions and seals are the Gentoo penguin’s predators at sea. Juveniles and post-molt adults are the most likely to get eaten at sea. Human’s actions and pollution cause deaths as well.

Gentoos are peaceful and curious towards humans, except when someone walks directly toward their nest or their guarded chick(s). Since they are constantly under watch from skua trying to steal chicks, they treat someone who moves directly and forcefully toward their nest as an imminent threat. On the other hand, if you sit or lie on the ground (the best angle for taking pictures), they will get closer and closer until they touch clothing or even parts of your body. Try to move in an abrupt fashion and the birds disperse in a great commotion. Get too close to a guarded nest and the guarding parent may react with a very painful flipper-slap.

Gentoos have paid a heavy price for their trust in humans, as collecting Gentoo eggs was once a thriving industry in the Falklands and other places. Early 1900s documentation shows that hundreds of thousands of eggs were collected and shipped to England. Today it is illegal to even touch a penguin’s egg.

Studies done on Wiencke Island (Cobley & Shears, 1999), where several breeding sites exist, including one visited by many tourists every breeding season, found that frequent visits from humans did not have much effect on overall breeding success of the Gentoo. When all the numbers were tallied, the visited site had similar reproduction numbers as sites that were not visited. This study confirms that Gentoo penguins, in places where they are accustomed to human presence, are not disturbed by humans’ visits, as long as those visits are conducted in a relaxed and controlled manner.

David has had the chance to meet the Gentoo penguin in many locations. During one trip to the Falkland Islands, waking up very early and battling the cool Falkland air, David rushed to the beach to see Gentoo penguins leaving for a day at sea. He watched them gather in a large group on the sand, preening and calling out to each other, before entering the water. All of a sudden, the group jumped into the water and headed out. In the late afternoon David went back to witness their return. In the distance he could see movement in the water. As it moved closer, he began to see individual birds flying in and out of the water as they porpoised toward the beach. As they dried off and began their short walk back to the colony, the next group was already plowing in and out of the water. As David walked back to the lodge, seeing them walk alongside him, he wondered how much energy these birds must use in a single day so full of activity.