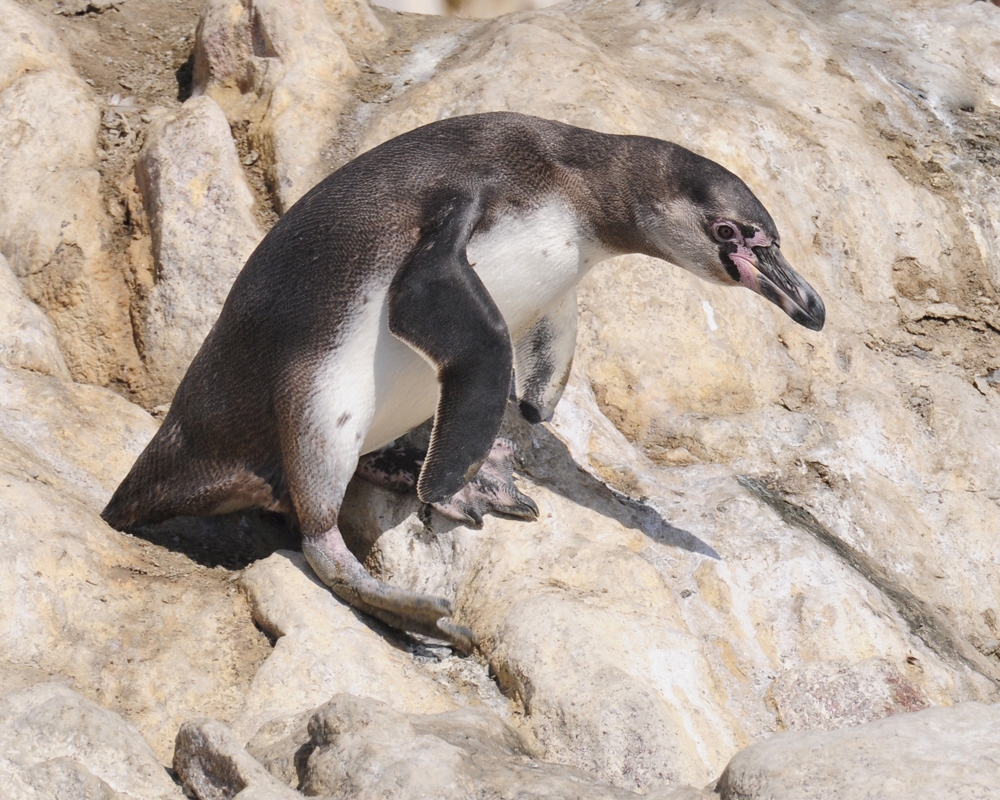 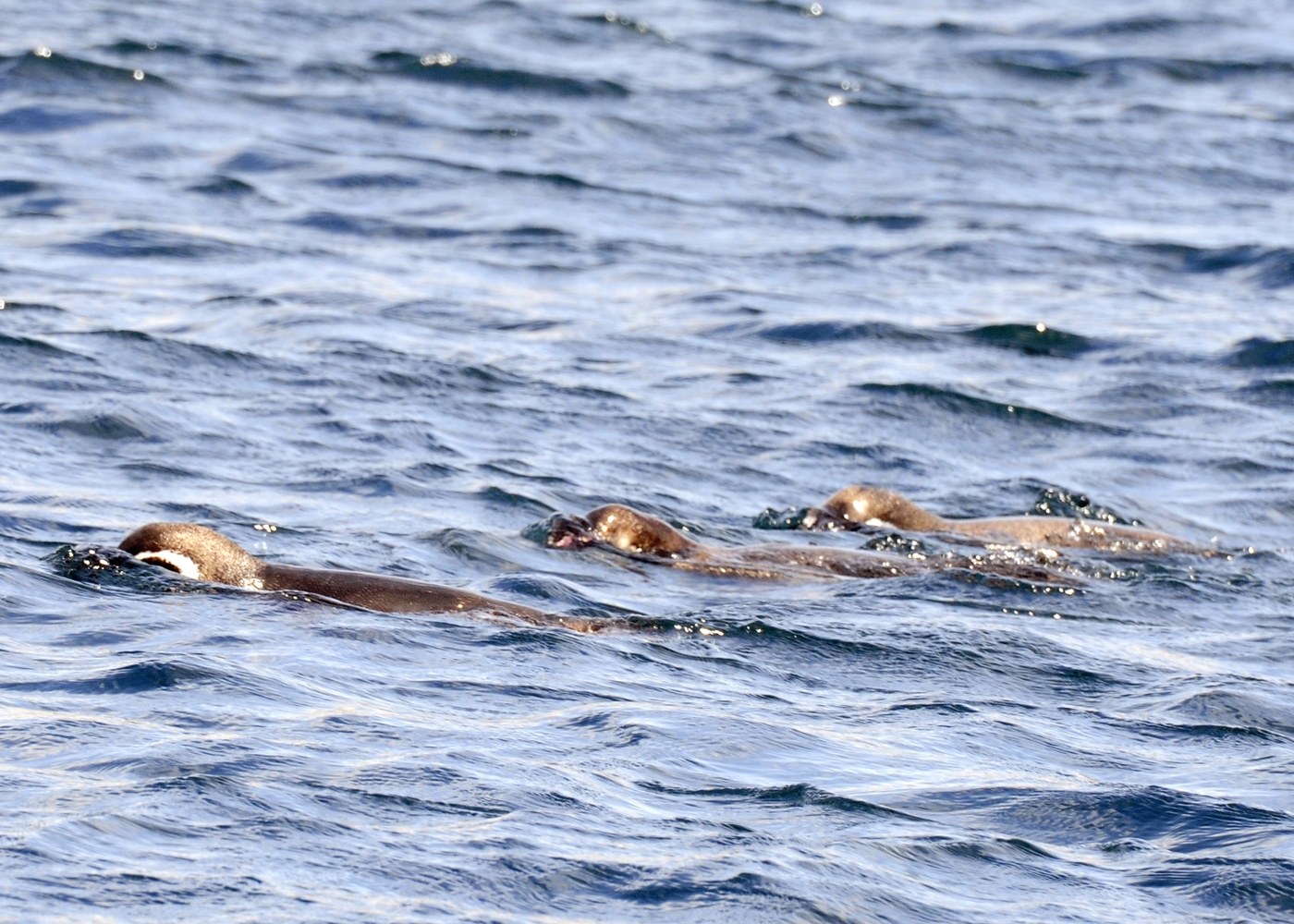 The adult Humboldt penguin, like other penguins in its genus, has a mostly black back and a white underbody. Its head and neck are black and white with contrasting black and white bands. It is very similar in appearance and size to the Magellanic penguin, the main difference being much larger pink patches on its bill and some noticeable differences in the black bands on its chest, neck, and lower face. Its most striking feature is a black band around its white underbody, which gets much wider around its chest and narrows along its sides, stretching the full length of its body. Its head is mostly black except for two expanding white half-circles beginning near its eyes and running down toward its neck. Its eyes are surrounded by pink fleshy-looking patches that are also present around the base of its bill and sometimes other areas of its face. Its chest and underbody are almost all white except for the contrasting black band. The Humboldt, like the African penguin, has black dots on its chest and other white areas. Unlike all other color features present, these dots vary in number, location, and configuration from one penguin to another, making each individual distinguishable. Its bill is almost all faded black except for some small gray areas and a lighter ring located about a third of the way up the bill. Its feet are also mostly black but may be stained with pink to white patches without any particular pattern. Its flippers are black on the outside with gray to white edges and white patches on the underside. Its irises are brown to red. Immature Humboldt penguins have brown to dark gray backs, necks, and heads, and no bands. Chicks’ downs are chocolate brown with a creamy white underneath.

The Humboldt penguin gets its name from the Humboldt Current, which is a cold underwater upwelling along the west coast of South America. It is very rich in fish. The Humboldt Current extends from Antarctica up along the coast of northern Chile, and further north past Peru. When it is on land, this penguin actually resides in the desert, which is not exactly a place you would expect to find a penguin. The Atacama Desert in northern Chile is a very hot place where summer temperatures can reach over 100° F (37.8°C). Some areas are so dry that they might not get any rain for ten consecutive years. Humboldt penguins breed on the shores of both Peru and Chile and on islands close to that area of the continent. Their habitat has the widest latitudinal range of any penguin species, starting from 5°S in Peru and ending at Puñihuil, which is 42°S in Chile (Araya, 1988). Galapagos penguins are the only penguins to breed further north than Humboldts. In Peru, rookeries are found in Punta, San Juan, which is home to the largest Humboldt breeding colony ( about 1500 breeding pairs). Humboldts can also be found in San Juanita Islet, the Ballestas Islands, the Chincha Islands, Pachacamac Island, and Isla Asia. In Chile, researchers have counted fourteen colonies, but lately breeding only takes place in ten of them. The biggest Humboldt colony is on Chañaral Island and contains about 25,000 individuals.

The Humboldt is the second most common penguin species in zoos and can be found in over 100 zoos and aquariums around the world, including:

Maximum Number of Eggs Laid per Year: 4; per Clutch: 2
Maximum Numbers of Chicks Raised to Fledging: 4; per Nest: 2

The Humboldt Penguin has two different breeding routines. In the northern part of their range, they have an unsynchronized breeding calendar. There is a peak in breeding around April or May. There is another breeding peak around September or October, during which pairs that failed to fledge a chick during the first breeding period try again. About a third of the successful breeders also try for a second time. In the southern range, most pairs only breed once. After the chicks fledge, the adults leave the colony for an extended foraging trip. Many do not return until the following year to begin the next breeding cycle. Two eggs are laid a couple of days apart. Humboldt penguins do not fast for extended periods during breeding or chick-rearing. Parents take turns incubating them for about forty days. Once the chicks hatch, the parents take turns brooding them for three to four weeks until they can both leave the chick alone to forage. Chicks’ stay in crèches until they fledge at about seventy-five days of age,around August or December, depending on the colony. Fledging success rates can be as high as 1.3 chicks per nest, but many couples breed in lower elevations where floods from the swelling ocean can cause eggs to wash away, resulting in a fledging success rate below 0.5 chicks per nest.

Because the Humboldt colonizes so close to humans, it suffers directly and indirectly from many human activities. People are the main reason the Humboldt’s population has dropped from above a million individuals in the 1930s to a mere 40,000 that live today. Guano harvesting, egg collection, hunting, fishing nets, overfishing, alien species, and pollution have all had devastating effects on the Humboldt penguin population. El Niño is another great danger to this penguin’s population. The changes in water temperatures caused by El Niño make the Humboldt penguin’s main prey change their swimming patterns and remain at large distances from the Humboldt colonies. This means the penguins must forage way out of their normal range in order to get enough food. Many starve or are forced to let their chicks starve in order to survive. In addition to these dangers, they still must worry about seals at sea and flying seabirds that snatch eggs and young chicks on land.

Humboldt penguins are friendly toward humans, as if they forgive man of all the trouble his actions have caused them. Their friendliness is apparent in zoos where one day they might outnumber their brothers and sisters in the wild. The main reason Humboldt numbers are dwindling is the inability of their human neighbors to share space and marine resources with these beautiful creatures.

Desperately Needed: Prohibition of anchovy and sardine fishing for at least a 500 mile radius around Humboldt colonies. Prohibition of guano harvesting within one mile of their colonies.
Needed: Current population census.

David first met Humboldt penguins on the Isla Ballestas, Peru. He hired a boat captain from the city of Paracas to drive him around the island so he could photograph the lovely penguins. It was 100°F (37.8°C) outside on the day of the boat ride. The captain navigated his boat within a few feet of the shore, allowing David to capture some amazing photos of the Humboldt penguins resting upon the rocks with tens of thousands of other birds that share the small island. Some Humboldts were molting while others entered and exited the water. Many seemed to be visibly uncomfortable, suffering from the heat. Many, many seabirds surrounded the colony, flying above or landing on the rocks, in a spectacular show of color and noise. David wondered if the Humboldt ever wished it too could fly.