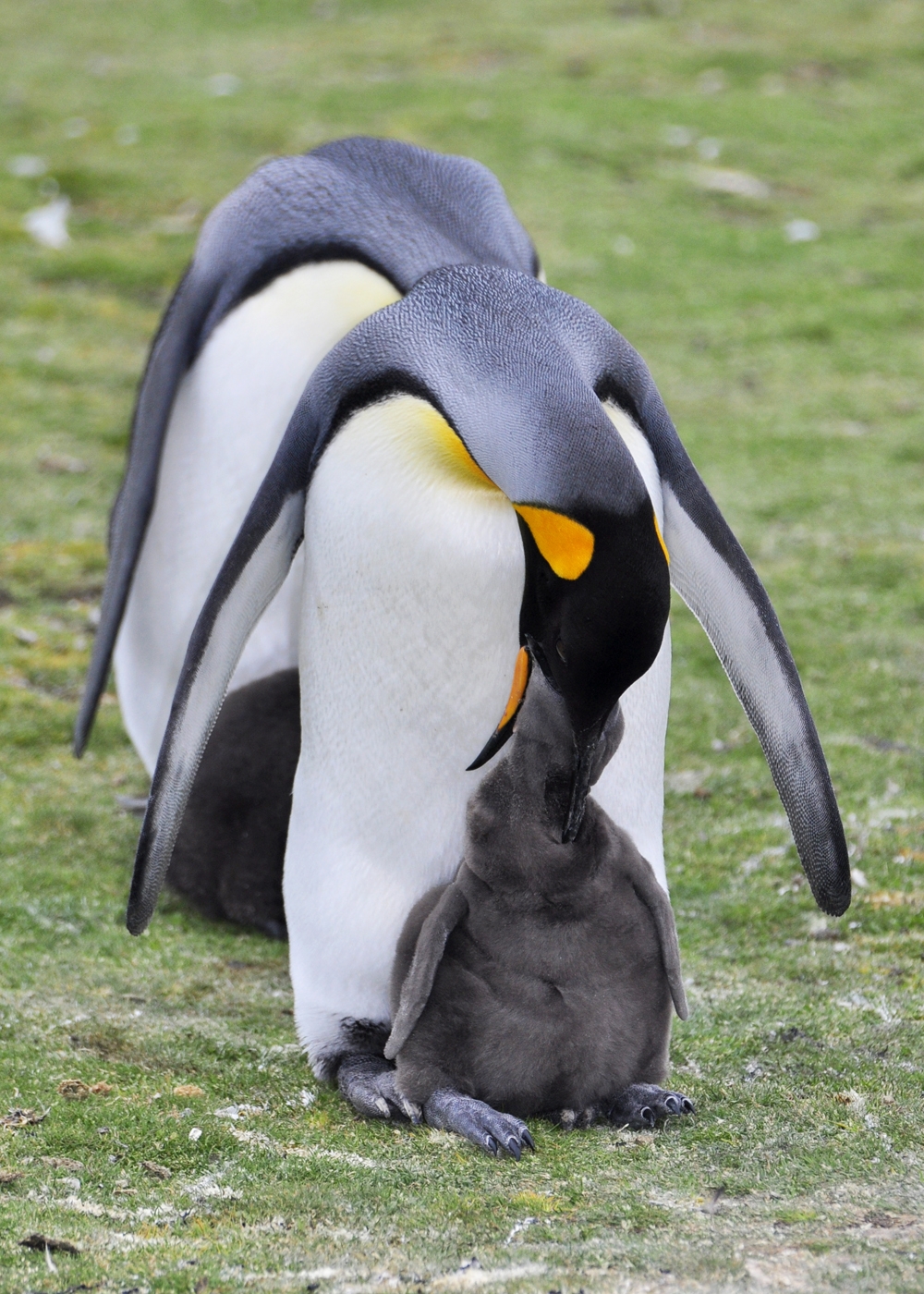 The adult King penguin is the second largest of all penguin species, and many consider it to be the prettiest, with colors even more vivid than those of its larger relative, the Emperor penguin. There is little difference between the male and female in appearance, although the latter is slightly smaller. The King’s back is steel blue to gray in color and the back of its head is black and easily distinguished from its paler lower back. The patches on the sides of its head (next to its ears) are a striking orange color, which gives the King its royal appearance. Its underbody is white and near the top it turns from yellow to a bright, solid orange color just under its neck. Its bill is the longest of any living penguin. The narrow, curving bill is black with an elegant orange line on the lower mandible. The King penguin’s feet are mostly black, and its flippers are black on the outside and mostly faded white on the underside. An immature King looks similar to an adult, but its orange patches are much paler, as is the orange line on its bill. At three months of age, Kings begin sporting adult plumage. Chicks are covered in a gray down that changes into a chocolate-brown down through molting.

King penguins breed in a range that extends from 45° S to 55° S on islands surrounding Antarctica in the South Atlantic, South Pacific, and South Indian Oceans. Notable rookery locations of subspecies A.p.patagonicus include: South Georgia Island, with 450,000 pairs (South Georgia Management Plan, 2002); Prince Edward (and Marion) Island, with 225,000 pairs; Crozet Island, with 450,000 pairs; Kerguelen Island, with 260,000 pairs; Macquarie Island, with 70,000 pairs; the Heard Islands; and the easier-to-reach Falkland Islands. The King’s swimming range is impressive. King penguins travel vast distances throughout the Southern Ocean when they are not breeding. A Norwegian group released several Kings in northern Norway in August of 1936, and the birds were spotted in the area several times in the 1940s, though none have been seen since 1949.

The beautiful King penguin can be seen in zoos and aquariums such as:

Small fish such as lanternfish and some squid.

The King penguin’s breeding cycle is longer and more complicated than any other penguin’s. Its breeding season lasts up to fourteen months. This means that it cannot breed every year. Some King penguins only breed twice every three years. They might follow one of two different breeding cycles. Cycle A begins in late October in South Georgia, while cycle B may not begin until March. Cycle B chicks rarely survive because parents do not invest all their resources in Cycle B, and as soon as the nest fails, they leave the colony and ready themselves for the next Cycle A. A female penguin lays one egg. Couples take turns incubating for about fifty-five days, until the egg hatches. The egg is secured atop one parent’s feet, under its skin pouch, while the other mate forages. Once a chick is hatched, it is guarded in the skin pouch for another 30 to 40 days. When the chick is old enough, it enters a crèche, and both parents leave to forage. Over the five-month-long winter, parents leave the chicks to fast alone and might not return to feed them for up to 90 days. Chicks that can’t reach 25lb (11.3 kb) before their parents leave do not stand a chance to survive the winter and end up dying of starvation. When the weather warms, the parents return and feed their chicks larger meals, and they feed them more often. After the chicks have gained weight, they fledge at about 300 to 350 days of age. King penguins’ fledging success rate is between 0.3 to 0.5 chicks per nest.

The King penguin is fairly durable. Its predators at sea include leopard seals and killer whales. However, their predation is low compared with other species. Flying seabirds sometimes attack weak chicks, especially during their fasting period, when the parents leave them alone for a very long time. Because they live on land rather than packed ice, global warming has not yet posed a threat to Kings, although scientists worry that it could still eventually lead to their extinction.

Kings are rarely bothered by the presence of people and are happy to be photographed from short distances. They may even come close enough to touch you with their bill if you become stationary and lower your height. Most of their colonies and foraging areas are far enough away from humans that their well-being is not affected by human activities such as fishing.

Mutual respect between man and King penguins did not always exist. During the second half of the 19th century, seal hunters murdered hundreds of thousands of Kings for their oil after already having devastated the seal population. Early explorers barbequed and ate King penguins and harvested their eggs. Such activities are now illegal. Because a King holds its egg on its feet and the slightest abrupt movement causes breakage, it is very important that humans not walk directly toward the center of a King colony, but rather avoid the core where breeders are guarding their eggs. If you can follow a few simple rules, visiting a King penguin colony can be an experience to remember.

David first met King penguins in the Falkland Islands. While he was struck by their beauty, he also immediately noticed that the colony was full of conflict. Because Kings position themselves so close together when brooding, they constantly fight over territory. These never-ending fights are hard to explain because King penguins do not have nests, and moving a few inches does not appear to create a problem. Yet with all the adversity and commotion that took place inside the breeding colony, when it came time to enter the water, the King penguins seemed to put their problems behind them and move as a united group into the sea. These penguins walked with authority, their bills perpendicular to their bodies. Although they fought often, their affection towards their mates was evident. Their personalities seemed very passionate on one side yet very aggressive on the other.