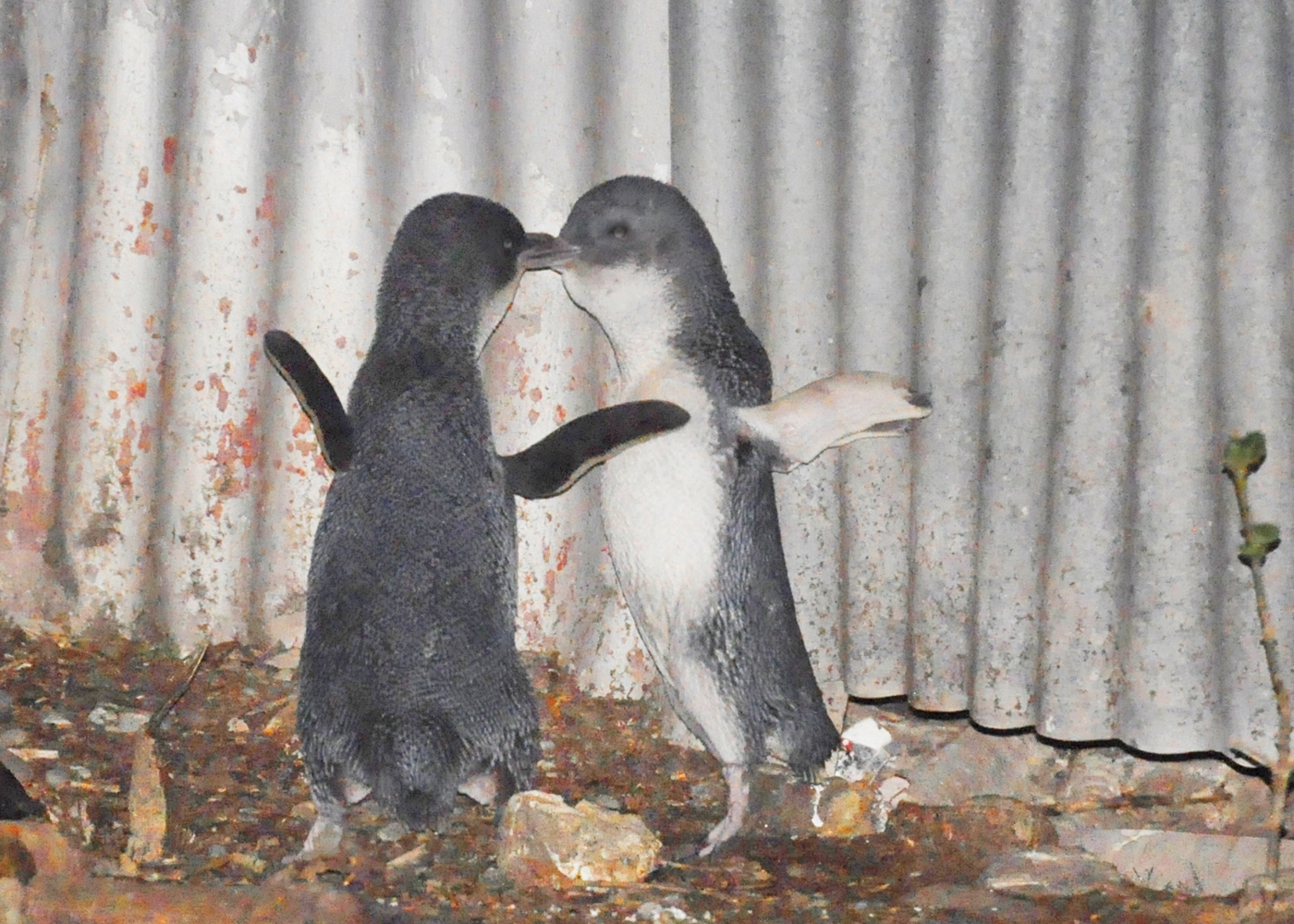 The Little penguin is the smallest of all penguins. An adult Little penguin has a dark slate blue to black back and head. The shade of blue depends on the subspecies. Its underbody is white but mixed with gray on both sides of its chest and neck. The mixture of white and grey on the borders extends up its entire throat to the bottom of its bill and turns grey as it reaches the penguin’s ears. Its bill is all black except the bottom part of its lower mandible, which is gray or sometimes even white. Its feet are pink with black soles. Its eyes are gray. Its flippers are black on the outside with some lighter areas on the underside. The White Flipper subspecies has a white band on both edges of both flippers, and its feet are white. An immature Little penguin is similar to an adult except that some colors are lighter, and its underbody and throat area is usually more gray than white. Chicks are covered in a brown down.

The Little penguin nests in colonies throughout New Zealand where it is thought to have evolved, but it also appears across the Tasman Sea in southern Australia. Like most other penguins, it colonizes smaller islands, but it is also found on mainland locations near developed human communities. In New Zealand, Little penguins settle on Oamaru, Otago Peninsula, and Chatham Island. Banks Peninsula is home to the White Flipper subspecies. In Australia, Little penguins can be seen in Cape Otway, London Bridge, Pennshaw, St. Kida, Phillip Island, Gabo Island, Lion Island, Middle Island, Granite Island, and Penguin Island.

It is somewhat surprising that the Little penguin, which is very shy in the wild and tries to avoid daylight, is adaptive to a zoo environment. Exhibitors use a type of light that is outside the penguin’s vision spectrum, so they are not uncomfortable.

Small fish (such as sprat and anchovy) and squid.

The Little penguin arguably has up to six different subspecies, each having slightly different breeding calendars. Because of this, it is hard to pinpoint a breeding cycle. Little penguins live at their colonies year-round but leave several times throughout the year for long foraging trips. The penguins on Phillip Island breed and lay two eggs around late September, give or take a month. The parents take turns incubating for about thirty-five to forty days. Little penguins do not reduce the brood but try to raise both chicks to fledging. They guard their chicks for three to five weeks before leaving them alone for the day and returning at night to feed them. Crèches are not seen in this penguin species. Chicks fledge between the ages of fifty and sixty-five days, usually during November or December. Their fledging success rate is normally between 0.5-1.2 chicks per nest, depending on the availability of prey that particular year.

The Little is the smallest of all the penguin species and is therefore not as fast and tough as the bigger species. Seals are the Little penguin’s greatest predator at sea. Diving in groups helps protect them from attack. On land, skua, gulls, and other flying birds prey on eggs, chicks, and weak or injured adult penguins. This species is seriously threatened by human activity because so many of their colonies are close to human cities. Introduced species such as dogs, cats, and rats take the lives of many Little penguins. Oil spills and the effects of climate change have also killed many of these birds.

The Little penguin in the wild is a timid bird and is made greatly uncomfortable by human presence and movement. Taking pictures of a Little penguin is almost impossible without a flash, but using a flash is not recommended because it might temporarily impair the bird’s night vision, which is weak to begin with. Because their colonies overlap urban areas, citizens’ groups try to enhance their environments and lives. These groups install small wooden houses to help prevent chick loss to natural and urban dangers. Fairy penguin parade watching is a pastime in both Australia on Phillip Island and New Zealand in Oamaru, where people line up on specially constructed seats. There, special light bulbs utilize a frequency which the Little penguin cannot see, thus making the penguin visible to onlookers without impairing its night vision.

David was on vacation in New Zealand when he first met the Little penguin. He chose to stop and visit the Oamaru Penguin Parade in the evening. Upon entering, David was told he was not allowed to photograph the penguins for fear that a flash would scare them. David was invited back during the day to photograph the penguins, but this was impossible because the Little penguins hid in their nesting boxes. It occurred to David that he may see penguins outside of the Penguin Parade path, and he went exploring. He found several groups of penguins emerging from the sea. Taking their photographs without light was nearly impossible. He watched as they stumbled ashore, calling out and bill dueling, as they rushed to their dirty holes. These were by far the strangest and least graceful of all the penguins David had encountered.