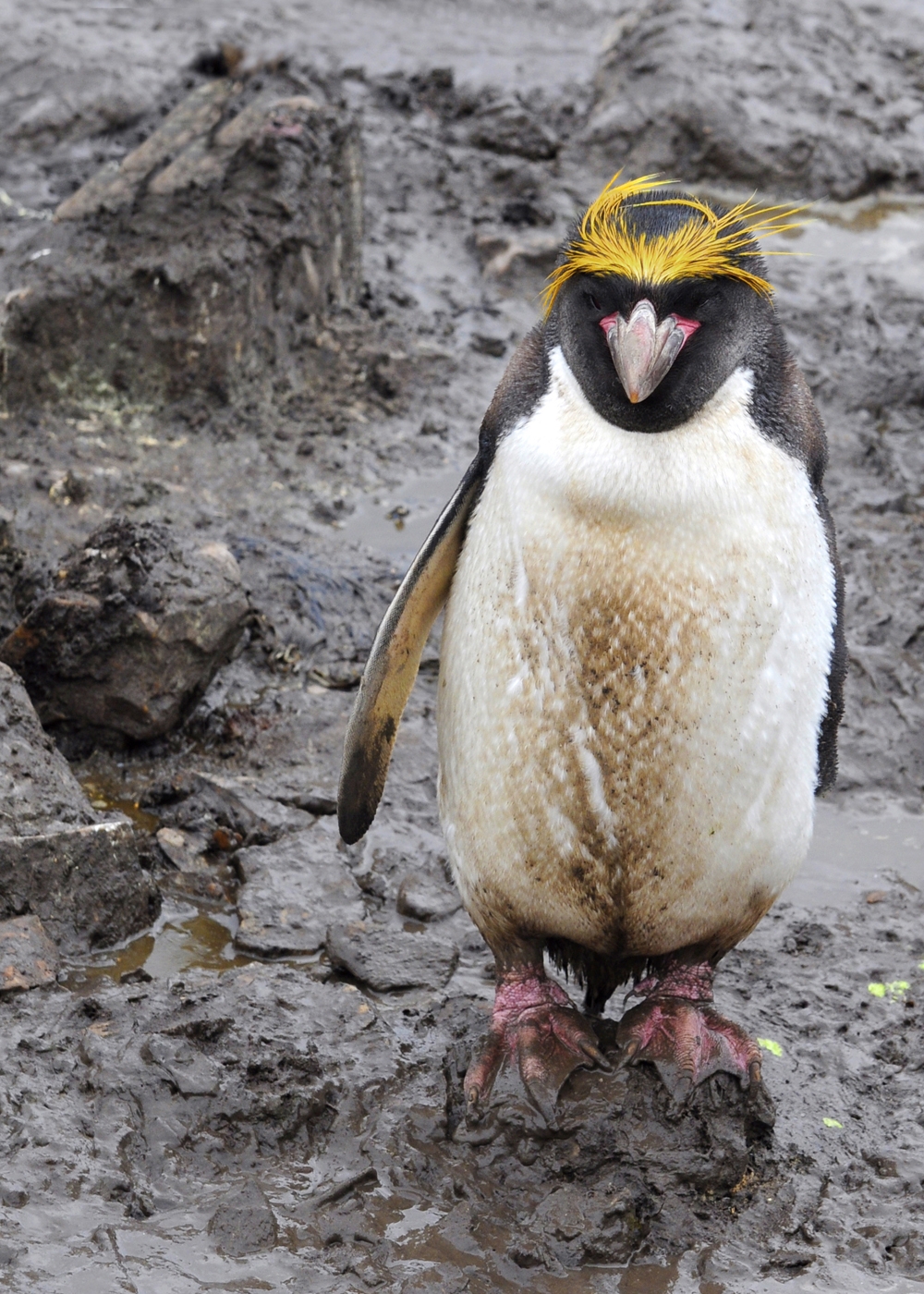 The Macaroni penguin has a similar appearance to the Royal penguin but with a different colored throat. The feathers on its back, head, chin, and throat are shiny black when new and dark brown just before its molt. Its underbody is white. The line between its black and white areas is sharp and well defined. Its crest is long and yellow (to gold) in color. It begins about a half inch behind its bill and projects backwards. The bill is large and hooked. It is brown to orange at the tip but a dirty gray near its face. There is pinkish-reddish featherless skin of a triangular shape at both sides of the base of its bill. The Macaroni penguin has bright red eyes. Its flippers are black on the outside with white edges on the bottom part and white on the inside with wider black edges on the upper parts along with other black patches. Its feet are pinkish with white and dark patches, but its soles and claws are black. An immature Macaroni penguin is somewhat smaller, and has a very short plume (crest). Its throat is gray to dirty white with no definite line separating the white and the black, and its bill is noticeably smaller. Chicks have dark brown and white downs.

The Macaroni penguin, the most populous of all penguin species, breeds in many locations. Smaller colonies are on islands at the southern tip of South America, while there are bigger colonies around the Antarctic Peninsula and island groups such as the South Shetland Islands. There are very large colonies on island groups to the east of the peninsula, such as the South Georgia Islands, which have the largest population–over 2 million pairs. Other island groups include the South Sandwich Islands, South Orkney Islands, Bouvet Island, Prince Edward Islands of South Africa, Marion Islands, Crozet Islands (very large colonies at Ile Des Pingouins), the Kerguelen Islands, Heard Island, and the McDonald Islands.

Macaroni will adapt well to a zoo environment if the temperature of the exhibit is kept cool.

Macaroni penguins are highly synchronized breeders. The males arrive at the colony during October or early November. The females arrive soon after and bond with their mates. A female lays two eggs (eggs A & B). The second egg (B) is up to sixty percent larger than the first egg (A) and usually hatches first. The male and female take turns incubating and foraging for about thirty-five days. During the first week, most of the “A” eggs are neglected and lost. If both hatch, which is rare, the parents reduce the brood to one chick by not feeding the smaller “A” chick. The second chick is guarded by the male for about twenty-five days before it enters the crèche, causing the male to endure a second long fast (more than 30 days). The female goes through one long fast at the beginning of the breeding cycle. Chicks remain in the crèche for up to thirty days before fledging in late February at the age of about sixty to seventy days. Their fledging success rate is between 0.4 and 0.5 chicks per nest at most colonies.

Antarctic fur seals and leopard seals prey on Macaroni penguins as they enter and exit the sea. Gulls, skua, petrels, and other flying birds prey on the eggs and chicks of the penguins. Because Macaroni penguins reduce their brood, it’s hard to tell the amount of avian predation that occurs in relation to the eggs that are taken because the parents often just leave them to perish. Pollution, krill fishing, climate change, and other man-made threats also threaten this penguin species.

Macaroni have minimal interactions with humans. The largest colonies are on islands that are even further east from areas most of the Antarctic cruises visit. Even ships that reach the South Georgia Islands spend most of their time visiting the Kings rather than the Macaroni penguins that breed in the more rugged areas of the islands. Relatively brave, when approached by humans, Macaroni penguins will allow a person within a fair distance before fleeing. They are not as photogenic as the larger penguins are, but their fights can make for photos full of action.

Despite being the most populous species, David had a very hard time encountering Macaroni penguins in the wild. He spent days looking for them in the Falklands and other sub-Antarctic islands. He saw only two single adults in all of his travels: one on Pebble Island and one on Half Moon Island. Both were inside a colony of a different species and fighting nonstop with their neighbors. After finally giving up on seeing the birds in the wild, David traveled to the Tennessee Aquarium in Chattanooga, TN to get a closer look and take more personal photos of the birds.