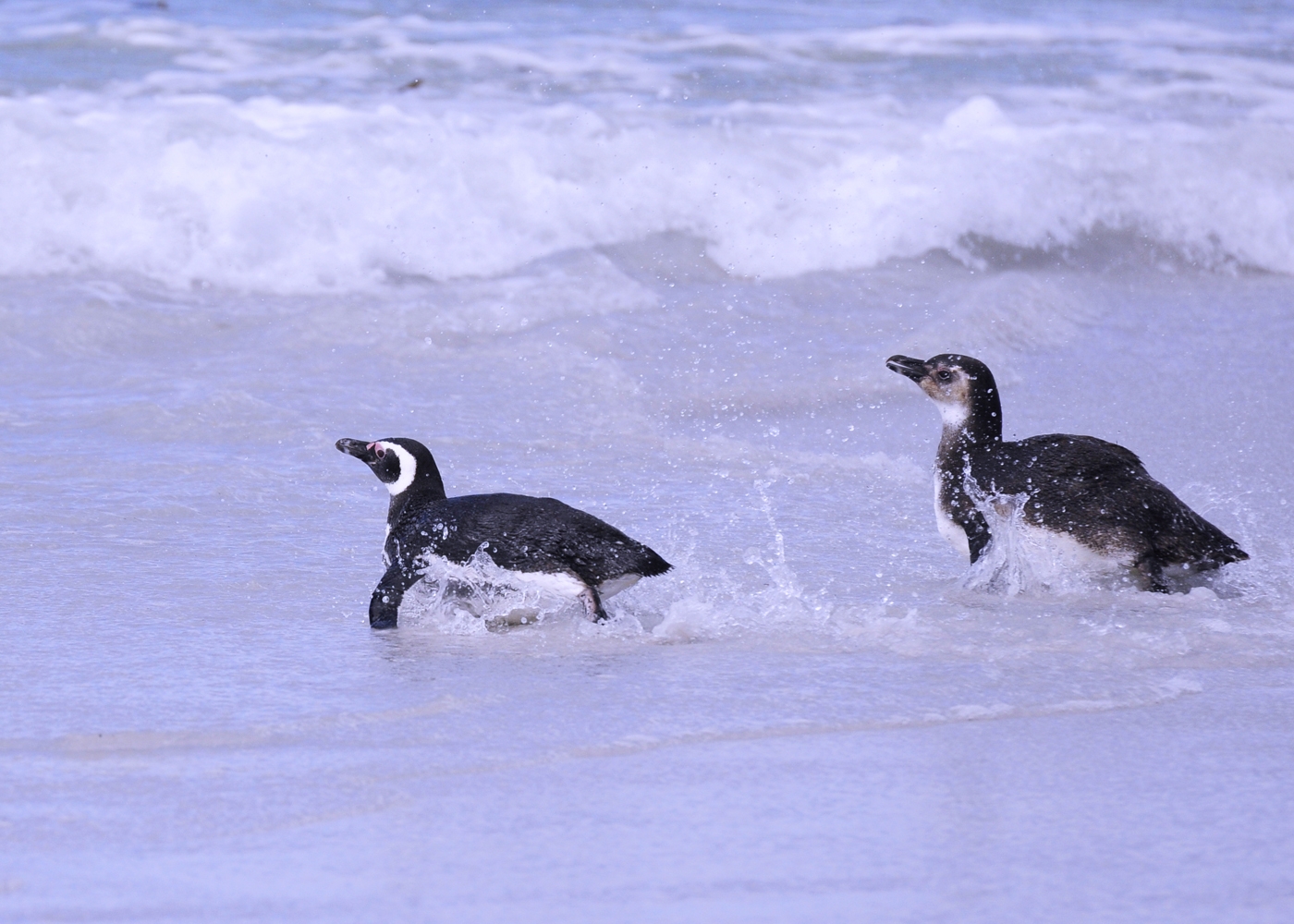 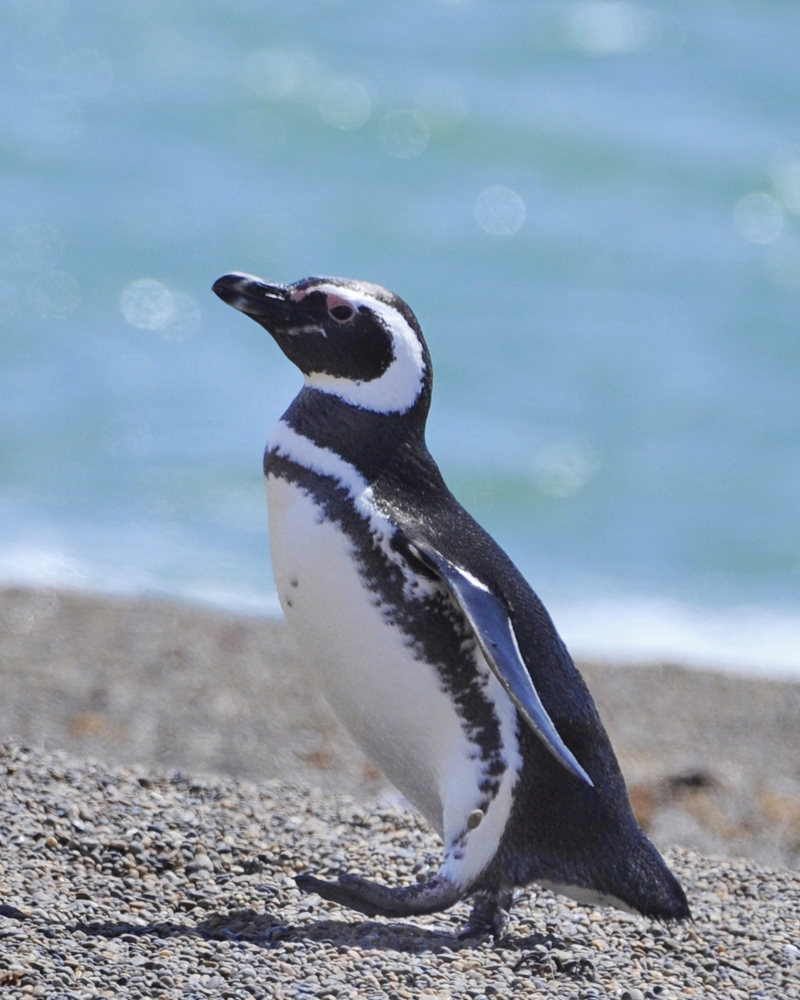 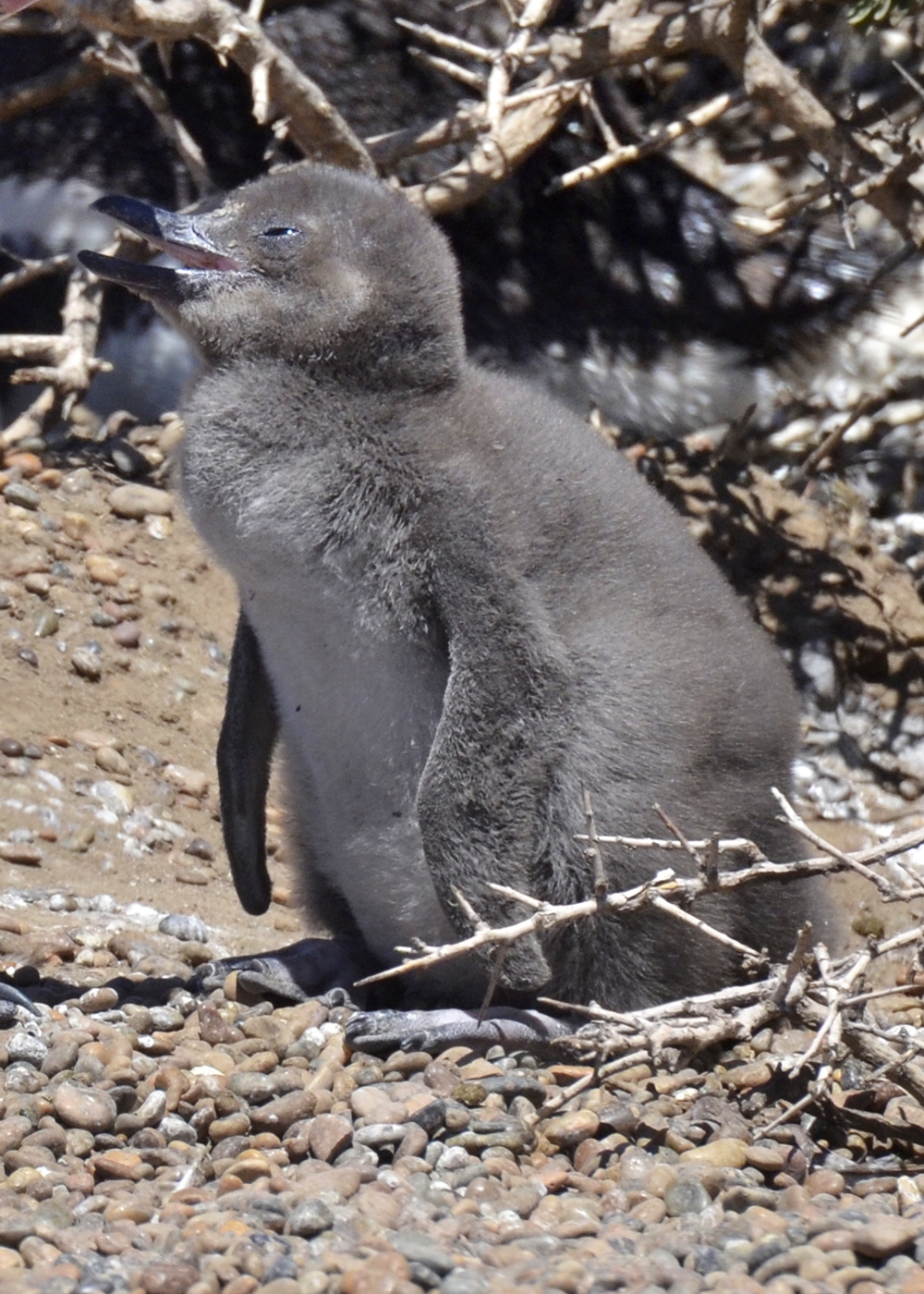 The Magellanic adult, like other banded penguins, features a mostly black back and white underbody, as well as a black-and-white head and neck. The only other color present is the pink of the featherless patches on its face and feet. The most visible markings are the white band around its mostly-black face and the black band around its white underbody. The front of its neck and chin are two-thirds black complemented by an almost perfect white band that extends from near its bill and eyes where there are irregular pink patches. Some describe this color pattern as two inverted black horseshoes on a white background, but pictures do it far better justice than words ever can. The Magellanic penguin’s eyes are brown, sometimes with red rings in them. Its underbody is almost all white with a few black dots spread across its chest. Some individuals have more dots than others, and some do not have them at all. Its bill is almost all black except for traces of faded yellow to faded white towards the tip. Its feet are also mostly black while its legs are stained with pink and white patches. Its flippers are black on the outside and a faded white on the underside. Immature Magellanic colors are lighter, with a brown to black back turning white at its underbody but without any clear bands. The lack of well-defined bands makes an immature Magellanic appear quite different from an adult. Chicks wear brown colored downs.

The Magellanic penguin is a migrating bird, just like many flying birds, except that it migrates by swimming. It possesses the most amazing navigation capabilities, enabling it to travel, in some cases, two thousand miles (3,200 km) in the water and later return to the exact same spot from which it departed. Around April, breeding Magellanic adults leave the Patagonia and Falkland shores to swim north to Peru and the central Brazilian coast. Around September they swim the return leg of the trip, landing at the beach and settling right into the same exact nest they used the year before. The mileage travelled on their winter journey round trip can easily exceed 2,480 miles (4,000 km). During the summer, Argentina, with sixty-three breeding sites and at least 800,000 breeding pairs, is home to most of the Magellanic nests. Magellanic penguins nest in places such as Punta Tombo, Caleta Interna, Valdez, San Lorenzo, Cabo Virgenes, and Caleta Externa. Of the thirteen known sites in the southern islands of Chile, Magdalena Island has the largest colony. The Falkland Islands also contain at least eight sites. The largest of these is on Sea Lion Island, which is home to about 100,000 breeding pairs.

Magellanic penguins adapt well to zoo life and often live long lives in captivity, sometimes reaching more than 30 years of age. They do not require a cold environment. Over a hundred zoos and aquariums house them, such as:

Magellanic breeding is very synchronous; almost all eggs in a colony are laid within two weeks of each other. The length of the breeding cycle varies from one geographic area to another, and fledging success varies widely by location, season, and year, depending mostly on food availability. Breeding season begins with the arrival of the males in early September to claim their old nests from the previous year. Females show up a few days later and almost always rejoin their former mates. The female lays two eggs, usually two days apart. Parents trade off incubation duties. Chicks fledge between 60 and 120 days of age, depending on the colony.

The biggest threat to Magellanic penguins is man. Magellanic penguins frequently find themselves competing with fishermen for the fish on which they prey or suffocating while caught inside their stationary nets. This penguin species forage in the middle of busy shipping lanes. The ships are far at sea and sometimes dump polluted materials into the water, killing the penguins. On top of man’s disturbing actions, the Magellanic is also preyed upon by fur seals, especially the young. As the seal population grows, the Magellanic penguin is at more of a risk. On land, flying birds, along with introduced species such as feral cats, rats, dogs, and ferrets, prey on the penguins and their eggs and chicks. Rabbits, as they run around, can cause eggs to break. Cattle and sheep also cause problems by eating the vegetation under which the Magellanic penguins breed.

The Magellanic Penguin’s interaction with humans can be described as friendly. Where visitors are common, they do not seem to be afraid if a person approaches them slowly and remains at a safe distance of about twenty feet (6 m). Walking straight toward them and getting very close on the beach causes them to disperse, sometimes in a panic. Near the nest, they hold their ground to protect their egg or chicks, and allow a person to get much closer. However, they easily get nervous when the person gets too close and people should keep a safe distance from their nests. Height difference is crucial to them, and if a person sits or lies on the ground, they become more comfortable and move closer, at times play and pull on clothing or camera bags.

The Magellanic penguin’s interactions with humans can be described as friendly. Where visitors are common, they do not seem to be afraid if a person approaches them slowly and remains at a safe distance of about twenty feet (6 m). Walking straight toward them and getting very close to them on the beach causes them to disperse, sometimes in a panic. Near the nest, they hold their ground to protect their eggs or chicks and will allow a person to get much closer. However, they easily get nervous if a person gets too close, and people should keep a safe distance from their nests. Height difference is crucial to them, and if a person sits or lies on the ground, they become more comfortable and move closer, sometimes even playing and pulling on clothing or camera bags.

The Magellanic Penguin was the first penguin David ever met. While in Chile, David drove to the Seno Otway colony. He instantly fell in love with the birds. Later, David flew to Argentina to visit the Punta Tombo colony. While in the area, David also discovered the San Lorenzo colony. After becoming stuck on a muddy road on Peninsula Valdez, David was helped by ranch owners who gave him a personal tour of the colony. Every time David visited the Magellanic Penguins, he got a different impression of them. They seemed so loving during the early chick guarding phases but fights were breaking out everywhere when he visited in September and almost every penguin had a bloody face. They were once again calm during late February, when the chicks were fledging. As they flooded the beach, David felt as though he was at a giant beach party.