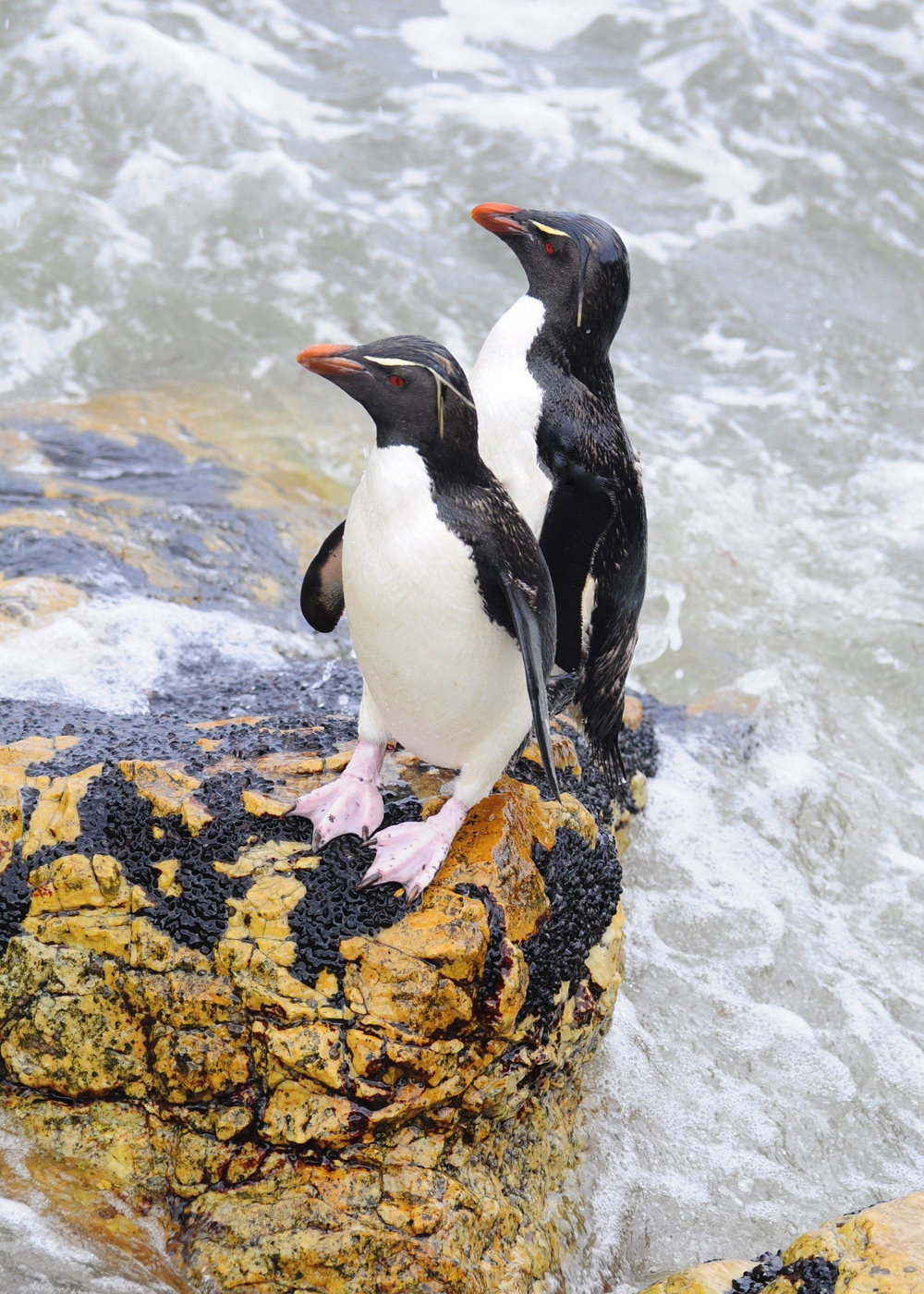 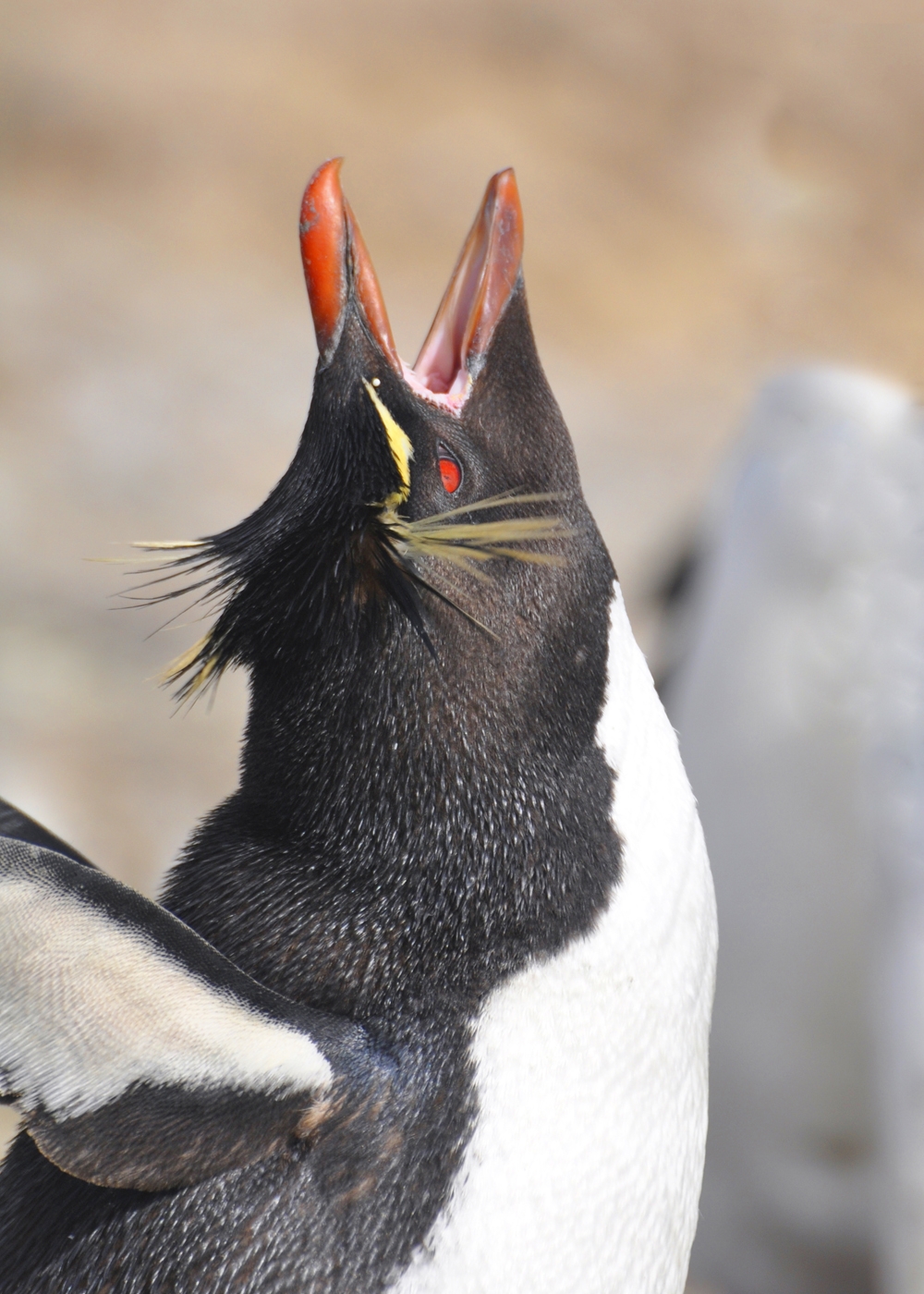 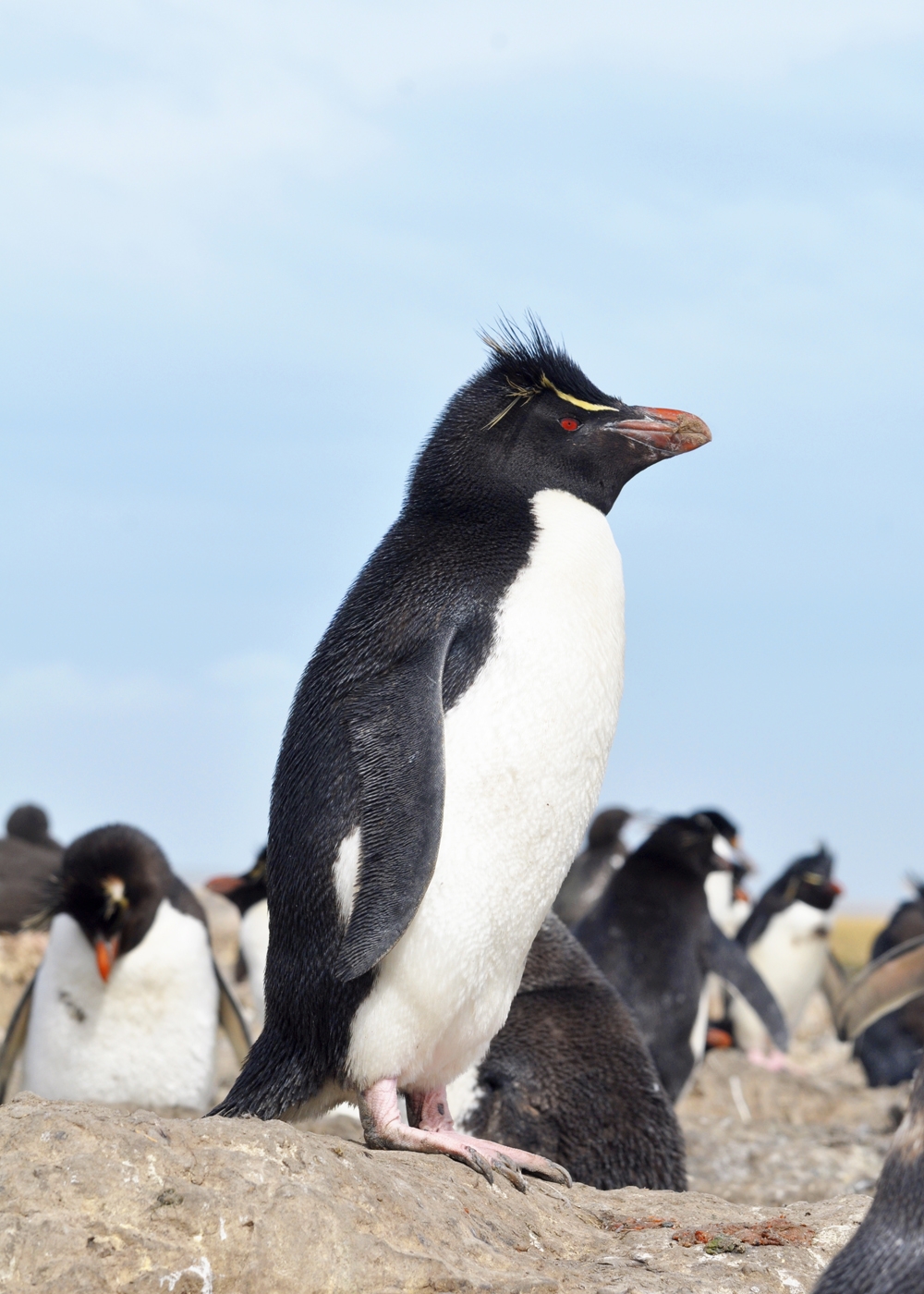 The Rockhopper penguin is the smallest of the crested penguins and the third smallest penguin species overall. Its simple but pretty color-scheme consists of a mostly black backside and white underbody. Its entire head is black except for a narrow yellow stripe. The upper part of its neck changes from black to white with no transitional section in between. The line where the white meets the black curves a bit around its neck and gives the appearance that the penguin is wearing an elegant baby bib on its chest. The crest is limp and has a yellow stripe about one centimeter wide that begins at the base of its bill and extends up over its eyes, acting as a base from which the rest of the crest rises. The yellow stripe and the rest of the crest appear to be pulled backward, like a hastily-made hairdo, giving the Rockhopper the look of a mad professor, especially when walking. Its bright red eyes and orange beak add elements of beauty, contrast, and color. Its flippers are black on the outside and white to pink with black edges on the inside. An immature Rockhopper penguin looks very different from an adult. Its back and flippers border on navy blue rather than black, and it has no yellow stripes and almost no crest. Its eyes may appear brown. Instead of the clear-cut transition of black to white on its neck, this area appears mostly gray or dirty white. Its bill is a dirty mixture of black, gray, and pink, and is nowhere near the bright orange of the adult’s. Chicks have brown colored downs.

Northern Rockhopper colonies are limited to a very narrow range on the South Atlantic island groups of Tristan da Cunha (Middle and Inaccessible Islands), Gough Island, and the Indian Ocean Islands of St. Paul and Amsterdam. The Southern Rockhopper distribution range is very diverse, circling the globe from 46 to 54 degrees South latitude from Islands located at the tip of Chile and Argentina up into the Falklands, Kerguelen, Prince Edward, Marion, McDonald, Heard, and Crozet Islands and up to Islands south of New Zealand such as Antipodes, Bounty, Auckland, Macquarie, and Campbell.

Zoos around the world are home to over 500 Rockhopper penguins from both sub-species.

The male Rockhopper penguin arrives at the colony around early October. There is up to a six week difference in arrival dates for the different colonies of Southern Rockhopper penguins. The male claims the nest and waits for the female to arrive. When she does, they bond and mate. Two eggs are laid around early November, the second being substantially larger than the first. The parents take turns incubating for about thirty five days. The second egg hatches first, and this is usually the chick that survives. Often the first egg is ejected from the nest. Most Rockhopper penguins reduce their brood within the first ten days of hatching. The chick is guarded for about twenty-five days by the male while the female forages. Both parents endure at least a thirty day fast during the early part of the breeding cycle. The male fasts for a second time during the guard phase. The chick then joins and remains in a crèche until it fledges at sixty-five to seventy-five days of age sometime between late January and late February. Their fledging success rate in most years falls between 0.3 and 0.6 chicks per nest.

The Rockhopper penguin’s population is in steep and alarming decline, and the exact reason is not fully known. Adult Rockhopper penguins have no land-based predators. But are preyed at sea by leopard seals, fur seals, killer whales, and blue sharks.  There are many hypotheses as to a cause, but scientists have yet to prove any of them. These penguins endure an unusually harsh breeding and molting cycle, which takes a great toll on their small bodies. Some researchrs suggest that Rockhopper penguins are quickly facing a reduction in their food supplies, leaving some penguins to starve to death. It could be that Rockhoppers are slow to adapt to the environmental changes that are occurring around them. Changing water temperatures and acidity, pollution, and diseases that may have emerged are all possible causes of their decline. Amid all this speculation, the Rockhopper penguins still face the proven dangers of flying birds, such as skua and caracara, stealing their eggs, chicks and injured. They also face fur seals, leopard seals, sea lions, and other sea mammals that prey on them as they forage. Plus humans put pressure on this species through oil spills, overfishing, pollution, and dangerous fishing nets. The demise of the Rockhopper population is more disturbing than that of most other species, because the losses are in the millions. Some colonies have lost over 90% of their formerly counted population. The devastation spreads over a very large range, and in most locations it is far from human presence.

The Rockhopper’s experience with man is of a mixed nature. In the 19th century, desperate oilers sometimes killed Rockhoppers for the few drops of oil they were able to squeeze out of their corpses. Other people collected their eggs for commercial reasons. Though isolated to a few locations, these practice were outlawed many years ago. Luckily, over most of its range, the Rockhopper has not suffered much from human activities, which makes it even harder to comprehend its serious population decline. The Rockhopper is also very intense and busy, and is usually surrounded by many other penguins of its kind; therefore, it almost always ignores humans and is easy to be photographed. Its lack of fear of man is also apparent in the ease with which it adapts to zoo life, seeming as comfortable as any penguin in captivity.

Desperately Needed: Find the cause for the rapid population losses affecting the Rockhopper penguin. Fishing prohibition within 1,000 miles (1,609 km) of any Rockhopper colony.
Needed: Better enforcement of pollution laws at sea. Better and more consistent population censuses in every colony.

David saw Rockhopper penguins in many different places during his travels. By far the best place to photograph them was in the Falkland Islands. On Pebble Island, David’s lodge hostess drove him to see a giant colony. A storm began to brew, and by the time they arrived, it was pouring rain. Discouraged, David asked to go home, but his friend insisted that they wait out the storm. Within thirty minutes, the clouds broke apart and sunlight flooded the colony. David slipped and slid in the mud as he tried to get closer to the colony. He climbed over rocks so he could photograph the birds all the way to the ocean. Thousands of Rockhoppers were climbing up and down the rocks, while others stood molting or preening. David took some of his favorite photographs that day. As he climbed back up the rocks and through the mud back to the car, he realized how exhausting it must be to be a penguin.