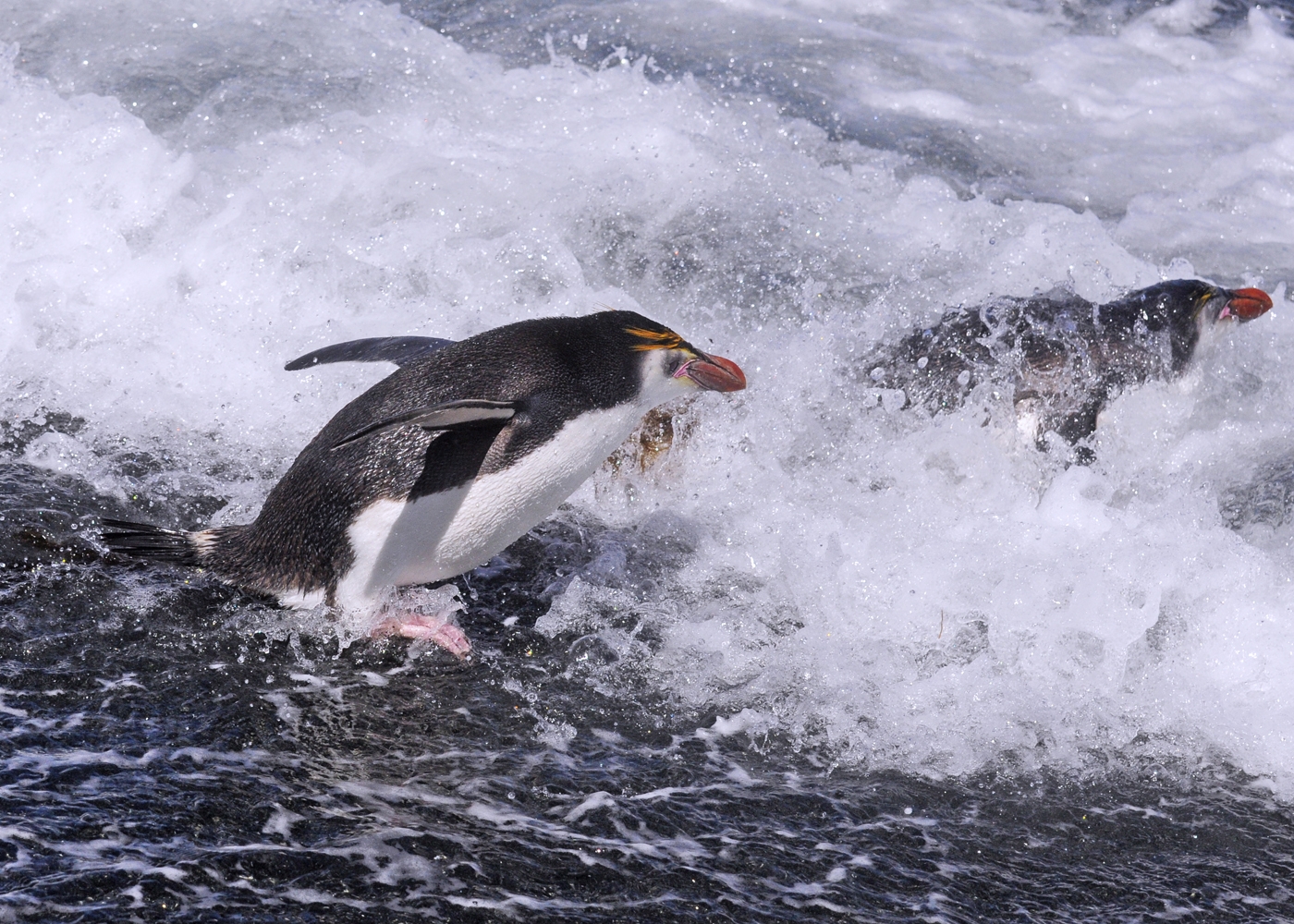 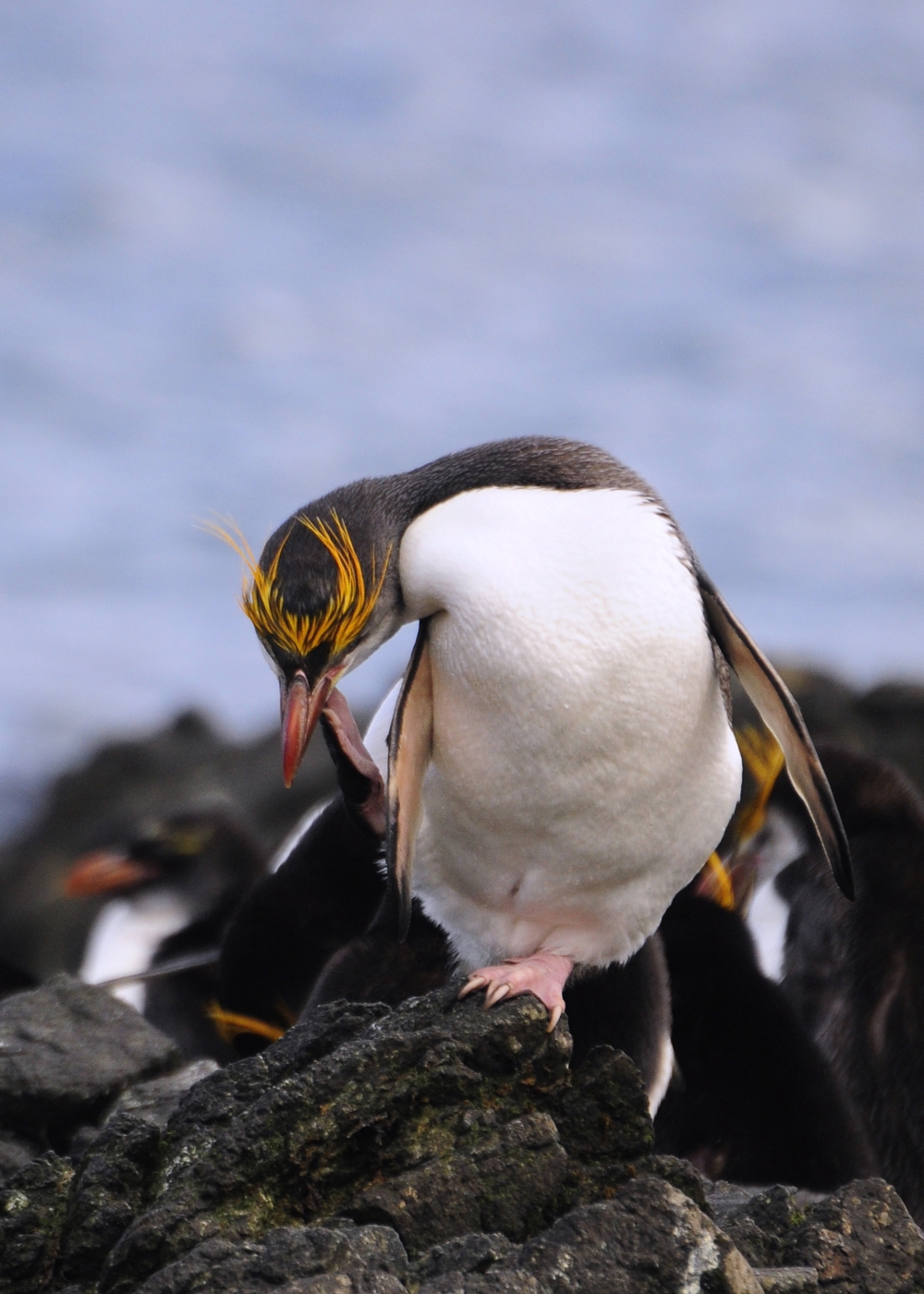 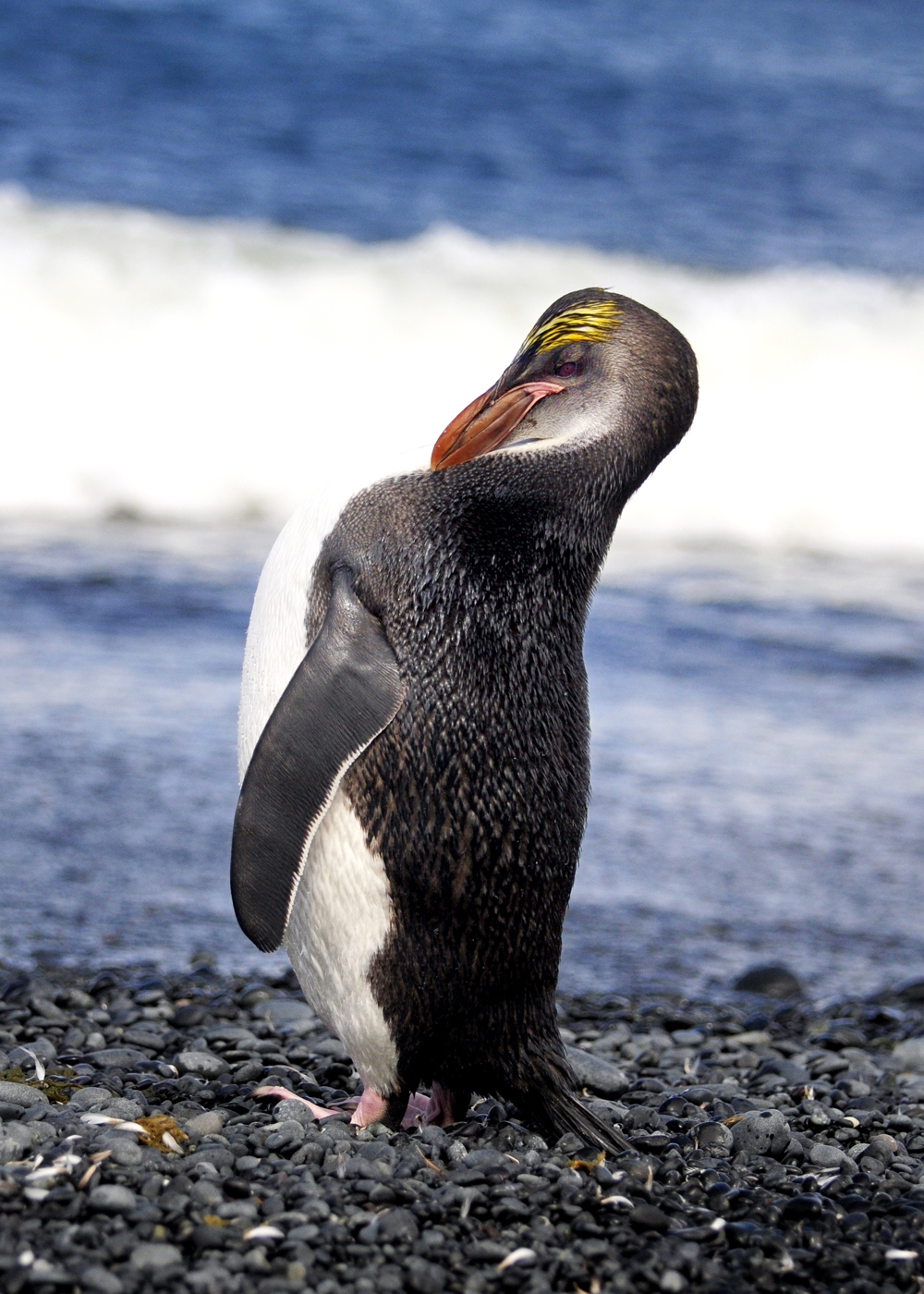 The Royal penguin is almost identical to the Macaroni penguin except for the color of its throat. An adult has a black back that extends to the upper part of its head and continues in a triangle shape up to its bill. Its white underbody, including its throat (in contrast to the black throat of a Macaroni penguin) and its face, reaches over its red or light brown eyes and meets the black triangle on top of its head. A bright yellow crest is intertwined with black plumes starting near the bill and projecting several inches backward, ending at the back of its head. Its flippers are black with white trim on the outside edges and a dirty white color on the underside. Its bill is orange to red with a dark gray patch at the base. From its bill to its eye, a very distinct pink triangle of bare, featherless skin can be found on each side of its face. An immature Royal looks noticeably different with the area around its face a duller black to light gray. It is also slimmer than a breeding adult, and instead of a crest, only a few very short yellow feathers appear above its bill. A chick’s down is a brown to dark gray color.

Royal penguins only breed at Macquarie Island, about 550 miles (885 km) south of New Zealand in the Sub-Antarctic Pacific Ocean, which is part of Australia. Along with the few Australian park personnel and approved researchers, the small island is home to three other penguin species: King, Gentoo, and Rockhopper. In winter, the Royal penguins leave the island and swim hundreds of miles away into the Polar Current.

Royal penguins are highly synchronized breeders. The male returns to the colony in late September. Two eggs are laid in the middle of October. The second egg is usually much larger than the first. The majority of the first eggs do not hatch or are ejected from the nest by the female. The parents take turns incubating for about thirty-five days until the chick hatches. The male guards the chick for about three weeks and endures his second long fast of the breeding cycle, while the female forages to feed the chick. After this time, the chick joins a crèche, and both parents forage. The chick will fledge at about sixty-five days of age. Fledging success is only 0.3 to 0.5 chicks per nest.

At sea, fur seals kill Royal penguins. On shore, skua and giant petrels prey on their eggs and chicks. Royal penguins also face the problem of having their eggs crushed by elephant seals. As with other species, changing water temperatures and general pollution pose a danger to Royals. Their diet greatly depends on the Polar Current, and as global warming intensifies, water temperatures increase. This causes the penguin’s main prey to move away from Macquarie Island, and the penguins are forced to travel farther distances to forage.

The Royal penguin’s interactions with humans began in a regrettable manner. In 1902, a New Zealander named Joseph Hatch purchased exclusive sealing rights to Macquarie Island. He soon introduced new and more efficient methods of slaughtering seals and increasing oil production. His methods were so effective, though short-sighted, that in a few years there were no seals left to murder. After decimating the larger Kings, Hatch turned to the Royal penguins for oil. Each day, 2,000 Royals were killed, each yielding no more than a half-pint of oil. Thus, Royal penguins have the horrible distinction of being the only penguin to be methodically slaughtered as part of a commercial oiling operation. By 1919, the Government of Australia had outlawed their killing.

Today Macquarie Island is a place that is designed to protect Royals, as well as the rest of the wildlife that reside there. The small Royals are too numerous and too busy to notice if a human is near them until they get within ten feet (3m). If the interloper gets too close, the Royals will stop their fights and quickly disperse. A few might freeze or start shaking their necks and heads to show their discomfort. Royals are very photogenic and they will continue their activities despite the presence of a camera. The stark contrast between the intense fighting and romantic courting is a photographer’s dream.

Getting to Macquarie Island is a difficult task. Travel to Macquarie is regulated by the Australian Government. Through Heritage Expeditions, David was able to take one of the few cruises that is allowed there each summer. When the boat landed at Sandy Bay, it was greeted by thousands of curious Royal penguins. They were very energetic, running around the crowded colony. They seemed eager to fight with each other, especially the juveniles that had just arrived for their annual molt. The young penguins frequently started bill duels with any penguin they encountered; they even fought while in the ocean. In contrast, David could also see how loving the Royal penguins were toward their mates. They reminded him of his young neighbors back home, who repeatedly fight with each other and then quickly make up. Royal penguins, he concluded, are just a vibrant species.