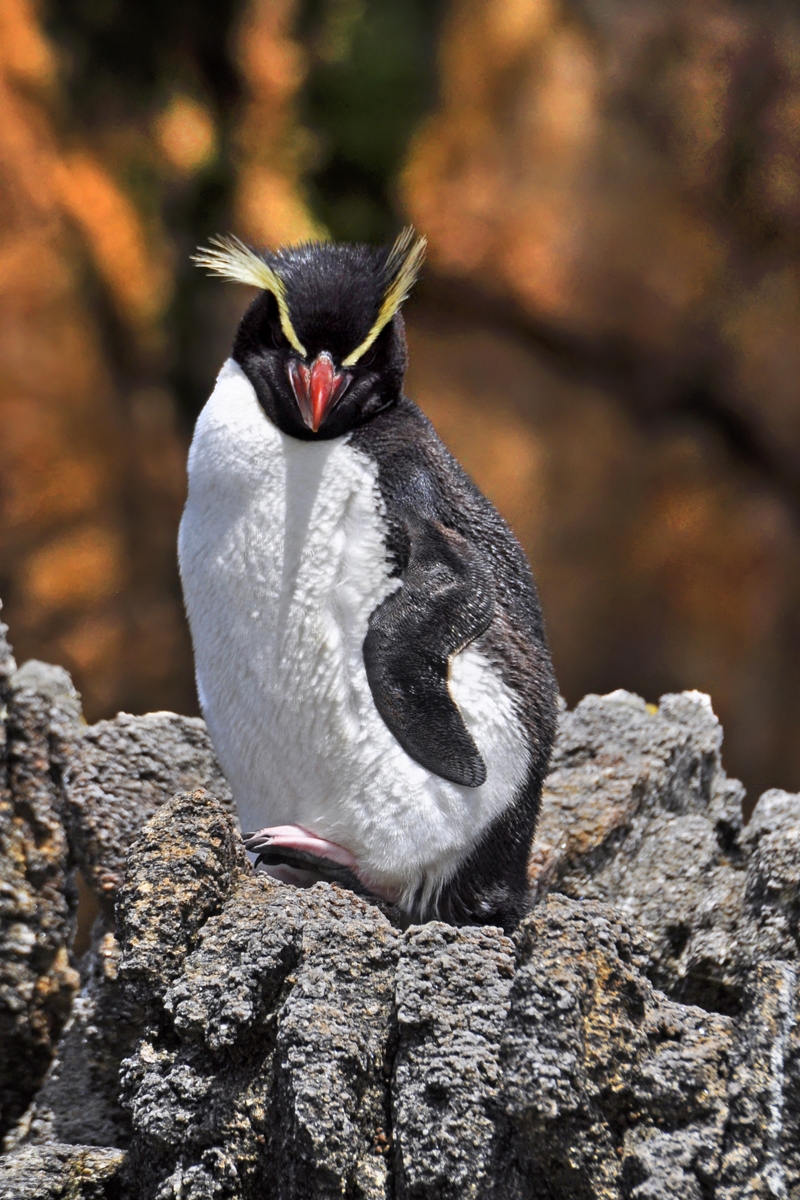 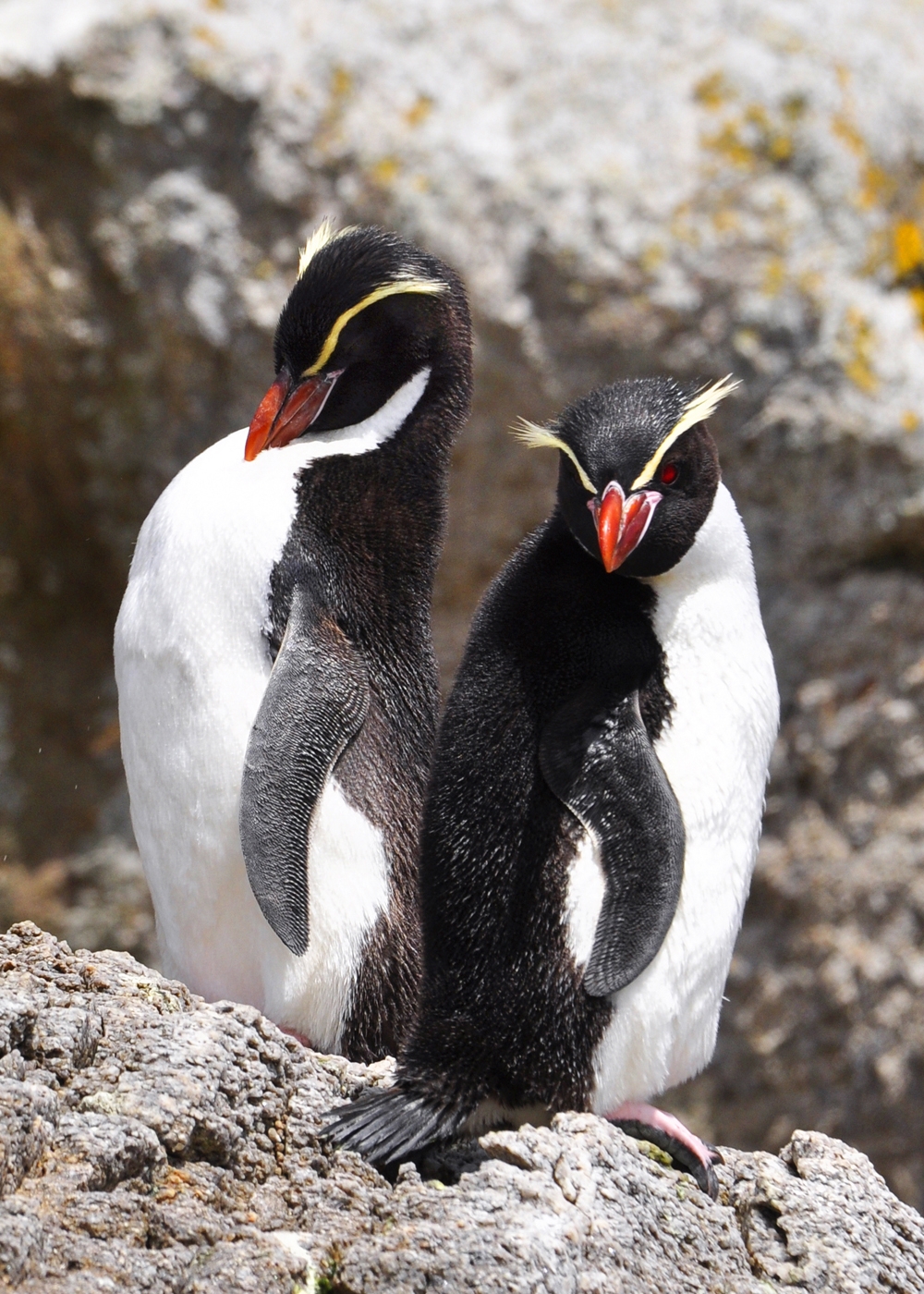 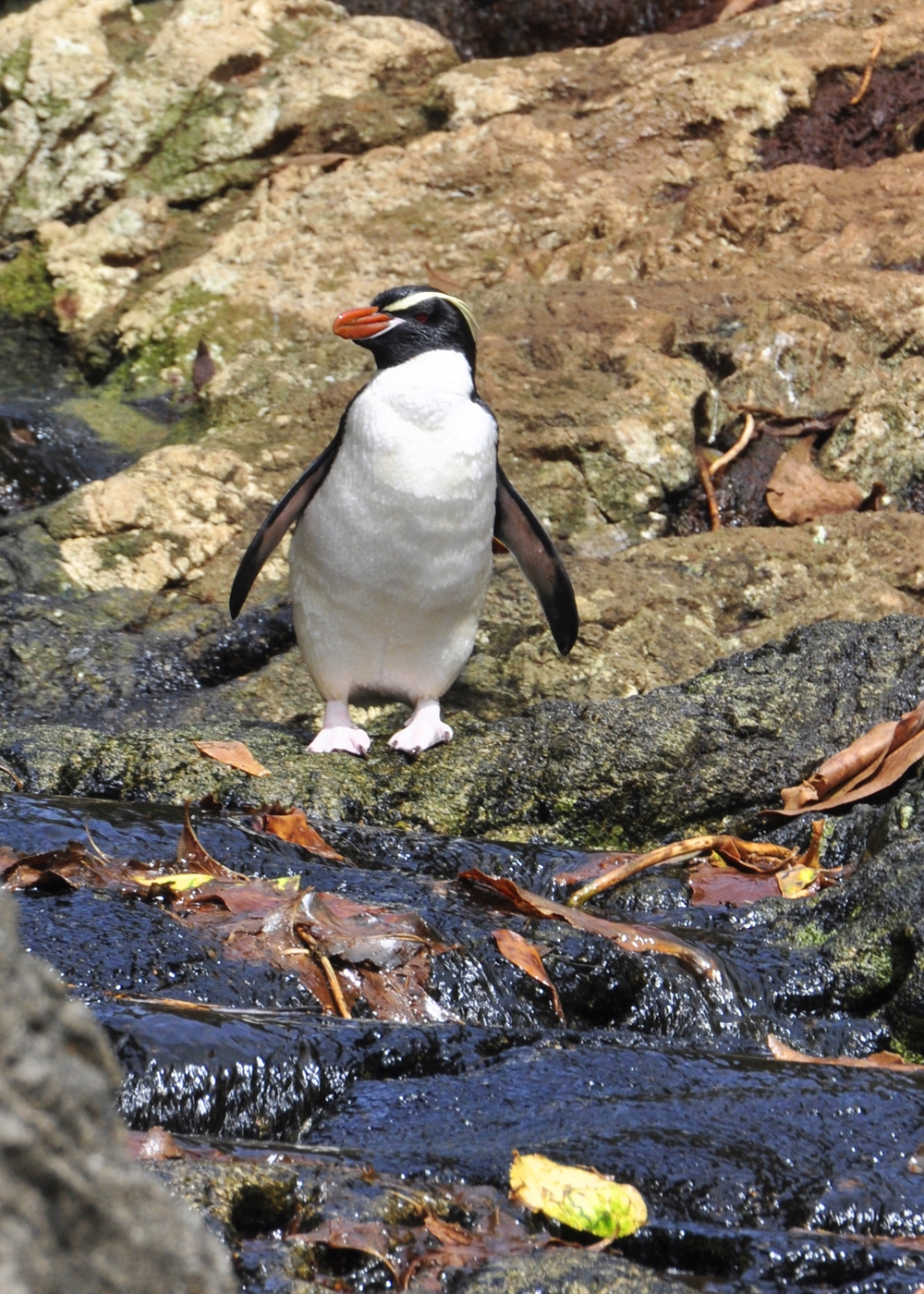 The Snares penguin looks very similar to the Fiordland penguin and can be difficult to distinguish from it, especially a juvenile or an adult at sea. Its back and head are a shiny black color that extends to the front of its upper throat and turns white just above its neck. Its underbody is white, and the transition between black and white is a clean, pronounced line. The black extends in a semicircle to the white around the base of its flippers. Its crest is long and mostly bright yellow, and it begins at the base of its bill and stretches over its eyes toward the back of its head. The top of its head has black plumes that are less bushy. Its crest stands up when dry and sweeps to one side of its face when wet. There are featherless, pink bands of bare skin surrounding its bill, appearing as a pink triangle from a frontal view. When sitting on eggs, adults develop brood patches, featherless areas of skin about mid-body, which creates better thermal contact with the egg. Its flippers are black on the outside and have a fine, dull-white edge. The underside is white with some pink and two black patches on each end. The intensity and size of the black patches varies from bird to bird. Its bill is a bright orange to red color and is very robust—hence the species’ Latin name “robustus.” Its feet have pink webbing with some black patches, black toes, and a black sole. Its irises are red. An immature Snare is smaller than an adult, has almost no crest, and its neck is gray. Its bill is a much duller black to dark brown color with only small areas of bright brown to orange, and its irises are brown rather than red. Chicks have brown down feathers.

Snares are endemic to Snares Island, New Zealand. The total area of the island is about 1.3 square miles (3.5 km squared), and it is about 130 miles (209 km) south of the southern tip of New Zealand. There are two main sub-colonies: the largest is on North East Island, and the other is on Broughton Island, about a mile (1.6 km) away. A third, smallers colony is on the Western Chain, a group of rocks 3.1 miles (5 km) to the west-southwest. The Snares terrestrial range is the smallest of any penguin species. Because of its pest-free status and vulnerable wildlife, the New Zealand government does not allow tourists to land on the island.

Krill, squid, and some small fish.

Male Snares penguins arrive the first week of September, and the females arrive a week later. They lay two eggs in late September. The second egg is significantly larger than the first and also hatches first. The parents alternate incubating the eggs for about thirty days. Each parent fasts for more than thirty days during the breeding cycle. If both eggs hatch, the mother will usually starve the smaller chick to death within a week of hatching. The male guards the surviving chick for two to three weeks, forcing him to fast again for almost thirty days. The female forages and feeds the chick while the male guards it but does not feed it. After the guard phase, the chick enters a crèche. It remains there for about forty to fifty days, until it fledges at about seventy days of age around February. The Snares penguins’ fledging success rate of about 0.5 chicks per nest is considered average.

Fur seals, leopard seals, and sea lions occasionally prey on Snares penguins at sea. Gulls and skuas have been known to attack chicks and eggs on land but less than with other species of penguin. Stale eggs and dead chicks usually litter the colony because their parents have ejected them from the nest. Those eggs and chicks usually provide sufficient food for the flying birds. The greatest danger to Snares penguins is changing water temperatures, which drive their prey further and further away.

Snares’ interactions with humans are scant. The Government of New Zealand strongly enforces its prohibition of landing on Snares Island. The big South Island of New Zealand is far enough away for this not to be a huge issue. When the penguins do see people on a Zodiac boat, whether out at sea or close to the Island, they seem happy and relaxed.

Desperately Needed: Research on all aspects of their lives.
Needed: Fishing prohibition and better pollution control.

Because tourism on Snares Island is prohibited, David went on a voyage with Heritage Expeditions, which, like most cruises, included small boat rides. David rode a small, inflatable boat called a Zodiac. The Zodiac driver drove the boat from the ship around Snares Island and across the area where the penguins were landing and departing. He never actually attempted to land on Snares Island. After fighting treacherous waters and almost missing his opportunity to see the island altogether, David was lucky enough to have one calm day to circle the island. The penguins were going about their daily activities, preening, jumping in and out of the water, and posing for pictures. The day was a great success. It was obvious to David how much the Snares penguin loved its protected home.