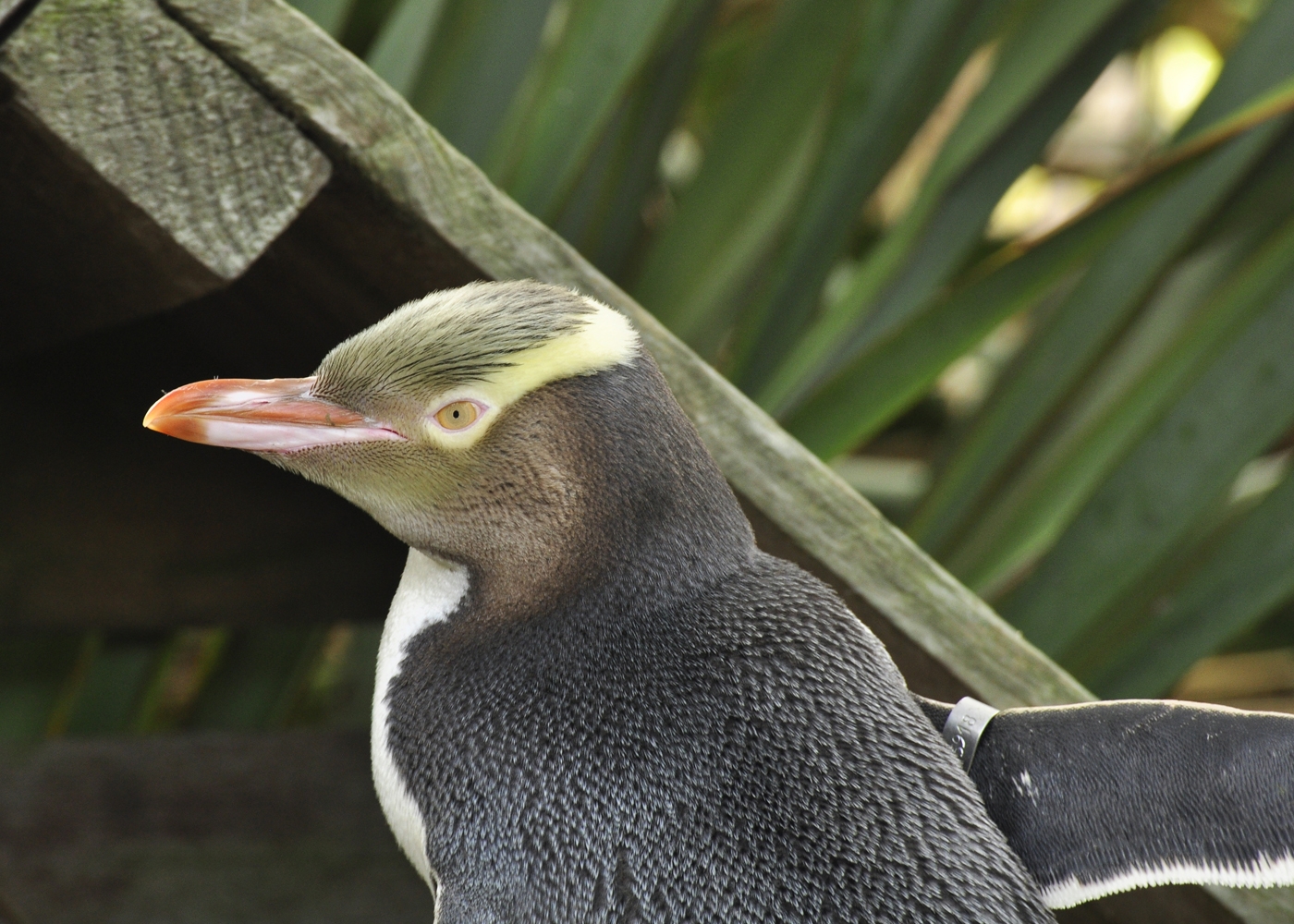 The Yellow-eyed penguin is the fourth tallest species, often reaching heights of more than 30 inches (76 cm). A pale yellow arc runs from around each eye to the back of its head. The rest of its head, especially its forehead, appears as black lines stretched over a yellow background. Its throat is yellow to white in color. The rest of the underside of its body is white except for two patches of black near and under each flipper. Its most striking characteristic is its pale yellow eye color, for which it is named. Its feet are pink. The color of its bill is complex but pretty—orange at the tip and for up to one-quarter of its bill. The rest of the upper mandible is white and gray with low orange lines, while the rest of the lower mandible is white. An immature Yellow-eyed penguin appears very similar to an adult but with less yellow on its head, and it has gray irises for up to five months of age. Chicks have brown down feathers.

Yellow-eyed penguins are few and spread out across a large area. About 800 live on the southern third of the South Island of New Zealand, from Banks Peninsula to the southern tip, and farther south on Stewart Island. The highest concentration can be found on the Otago Peninsula. Campbell and Auckland Islands have the largest populations with 1,200 to 1,300 individual penguins combined. Numbers can change 20 to 40 percent from one year to the next.

The Yellow-eyed penguin cannot be found in zoos because it is a very timid bird and will not reproduce in captivity.

The Yellow-eyed does not take an extended foraging trip, so it does not have an arrival date to begin the breeding season. Courting begins around August to early September. Pair fidelity is high, and most penguins mate with their partners from the previous year. Females lay two eggs by mid-September. The small colonies are very synchronized; all members lay within about three weeks of each other. Parents share incubation duties for about forty days before the eggs hatch. They change nest duties almost daily and do not endure long fasts during breeding. Parents also take short turns guarding the chicks. For the first five to eight weeks, the chick stays in very close proximity to the nest; thereafter, both parents leave the chick alone to forage. They all return to the nest at night. Chicks fledge at about one-hundred five days of age, around the month of February. Yellow-eyed are very dedicated parents, and their breeding cycle is the third longest of any species. The parents’ efforts are reflected in their high fledging success rate of up to 1.5 chicks per nest.

The Yellow-eyed penguin’s need to be alone puts it at greater risk of danger than other species. As humans eliminate the thick vegetation it uses to nest, its breeding success rate drops. Additionally, fishermen are reducing populations of their prey. They also leave stationary nets in the water, trapping and killing the hungry penguins. Humans have introduced many detrimental species to the Yellow-eyed penguin’s environment, such as dogs, cats, rats, and stoats. At sea, the Yellow-eyed penguin is preyed upon by sea lions and barracuda. Another serious threat to the Yellow-eyed is an unidentified disease that became apparent in the 2004-2005 season. The disease killed chicks during their first 3 weeks of life. Extensive necropsy and pathology work performed by wildlife veterinarians at Massey University was unable to determine what triggered the outbreak, and an effective treatment has yet to be recommended.

The Yellow-eyed is not the friendliest of penguins and does not enjoy the company of other Yellow-eyed penguins or any other birds, so it should be no surprise that it is not friendly toward humans. Shy and nervous, Yellow-eyed penguins will often hide in bushes. Even in areas where people constantly visit, they are unmistakably uncomfortable with their presence. When they see a person, they rapidly move their eyes, necks, and heads in distress. Each time this occurs, it takes a few minutes before they can relax and compose themselves enough to cease their nervous behavior. Still, several studies have shown that when humans view the penguins through a tunnel with small 4 inch (10 cm) viewing slots which reduce the onlooker’s appeared height to make them look shorter, the penguins’ stress is greatly reduced. Yellow-eyed penguins become habituated to such human presence and carry on their normal activities. Breeding success and behavior have been found to be the same for Yellow-eyed exposed to this modified human presence and birds not exposed to humans at all. Like all other penguins that live near human settlements, they suffer immensely from people’s direct and indirect actions. Adding to the Yellow-eyed’s suffering is the fact that uncontrolled human presence can be a cause of distress, resulting in lower weights of fledglings when compared to those in areas free of human contact. Current efforts to reduce the negative impact caused by man’s presence are encouraging but might be too little too late.

Desperately Needed: Extreme action must be taken in order to save this species. Because it is probably too late to save the Yellow-eyed in the wild, a large nature preserve must be built that will separate the penguin from natural and introduced dangers. Hand-feeding on occasion should be considered.
Needed: Protect the penguin from introduced species, such as dogs and feral cats. Replant large amounts of thick bushes to recreate the shade and cover that this penguin needs. Remove all sea lions from the Yellow-eyed’s breeding range.